SEOUL, June 1 (Yonhap) -- President Moon Jae-in on Thursday ratcheted up his push to secure a 11 trillion won (US$9.8 billion) extra budget for job creation, saying he would visit parliament to gain its backing at an "appropriate time" if need be. 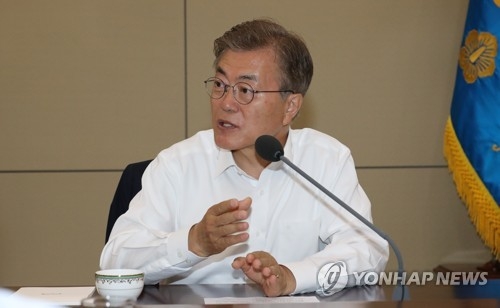 On the campaign trail, Moon vowed to give more responsibilities to the prime minister in running state affairs. Past premiers had played only a limited role with former presidents calling all the shots.

During the meeting with his secretaries, Moon also directed the government to craft a comprehensive plan to manage growing household debt by August.

"I call on you to explain the difficult economic reality to our citizens as it is and report (to me) a mid- and long-term plan to cope with the debt through a separate meeting," he was quoted by his spokesman as saying.

Household debt jumped 11.1 percent on-year to 1,359.7 trillion won at the end of the first quarter, according to the Bank of Korea.