SEOUL, June 1 (Yonhap) -- Ryu Hyun-jin of the Los Angeles Dodgers has thrown a solid game in his return to the starting rotation.

Ryu tossed six effective innings in a no-decision against the St. Louis Cardinals at Busch Stadium in St. Louis on Wednesday (local time). Ryu held the Cards to a run on three hits over those half-dozen frames, while striking out four and walking one.

The South Korean left-hander was lifted for pinch hitter Austin Barnes in the top seventh with the score knotted at 1-1. He remains at 2-5 for the season but lowered his ERA from 4.28 to 3.91.

This was Ryu's eighth start of the season and first since May 18.

Last Thursday, Ryu made his first relief appearance in the majors and earned his first career save with four scoreless innings against these same Cardinals. He'd been squeezed out of the crowded Dodgers rotation, with the combination of his own inconsistency and some strong outings by others jockeying for position on the staff.

The Dodgers placed left-hander Alex Wood on the 10-day disabled list, opening up a spot for Ryu to take the mound against the Cardinals.

And Ryu made the most of his opportunity. 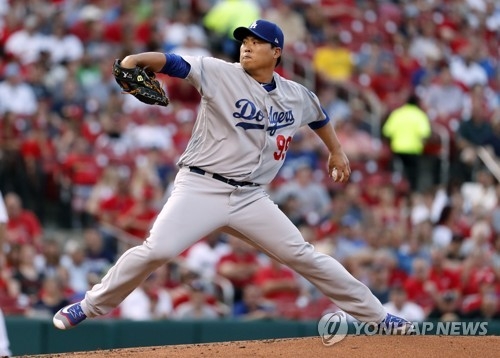 He retired the side in order in the first but got into some trouble in the second.

Tommy Pham hit a one-out single and moved to second on Stephen Piscotty's fly out to center. Paul DeJong then launched a double over the head of center fielder Chris Taylor to bring Pham home.

Ryu was hardly threatened the rest of his day. He retired the next five batters in a row, three by swinging strikeouts, before Piscotty hit a ground-rule double with two outs in the fourth.

Ryu then settled down and set down his final seven straight batters.

Ryu missed the entire 2015 season with a shoulder injury and made just one start last year before elbow problems ended his season.

He has never been an overpowering pitcher and coming into this game, the average velocity of his four-seam fastball this season was 89.6 mph, more than 3 mph slower than the major league average. But he induced plenty of weak contacts against the Cardinals with an array of sliders, curves and changeups.

He got seven groundouts and six flyouts, most of them of the soft variety.

Ryu touched 92 mph with his fastball in the first and again in the third, but the four-seamer sat around 90 mph. He did get two of his strikeouts on fastballs, while the other two came on sliders.

Ryu has been mostly undone by extra-base hits this year, and two of the Cards' three hits off Ryu in this one were doubles.

He entered Wednesday's game having allowed eight home runs, 11 doubles and a triple in 40 innings, with opponents' slugging percentage of .519.