The KF-16s took off at around 5:30 a.m., originally scheduled to arrive in Alaska about 10 hours later, according to South Korea's Air Force.

The flight distance to the Eielson Air Force Base, the venue for the annual RED FLAG-Alaska training, is some 7,700 kilometers.

But they made a stopover at the Yokota Air Force Base in Japan due to a change in scheduled aerial refueling, it said.

The KF-16s will resume their flight on Friday toward Alaska.

South Korea will also dispatch a C-130 cargo plane and more than 100 personnel to the series of drills on joint offensive, counter-air operation, interdiction and air support under a simulated combat environment. 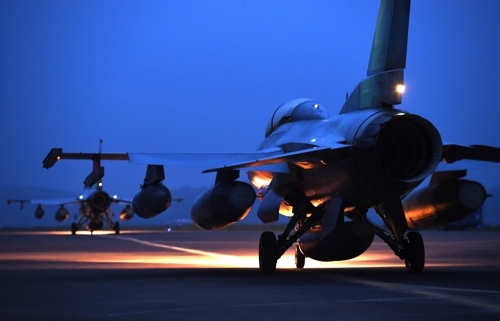