Jang, who plays with Guangzhou R&F in the Chinese Super League (CSL), is one of the 24 players called up by national football head coach Uli Stielike for South Korea's friendly match against Iraq on June 7 and their FIFA World Cup qualifier against Qatar on June 13. Though the CSL is in full swing, the 25-year-old was allowed to join the national team training at the National Football Center in Paju, north of Seoul.

He said he wants to leave Guangzhou since he isn't getting an opportunity to play, which affects his fitness and form.

"I know I'm in a very difficult situation," Jang said. "Unless my teammates get injured, I can't play."

He joined Guangzhou R&F from FC Tokyo in 2014 and then signed a five-year deal with the Chinese club worth 10 billion won (US$8.92 million) the following year. He had been playing regularly with Guangzhou, but this season, he took a big hit from the CSL's rule change on foreign players.

Previously, teams were allowed to play three foreigners plus one Asian player. But now the Asian quota is gone, and that one spot in the lineup must be filled by a Chinese player under the age of 23. Guangzhou R&F have four other foreign players on their squad -- Eran Zahavi of Israel, Apostolos Giannou of Australia, and Brazilian midfielders Renatinho and Junior Urso.

So far in the 2017 CSL season, the versatile defender has made only one appearance.

"I really want to transfer to another club," he said. "But things aren't going as well as I planned."

Although his situation with the club isn't good, Jang said he is ready to help the Taeguk Warriors, which are preparing for the crucial World Cup qualifier. South Korea are currently second in Group A in the final Asian qualifying round for the 2018 FIFA World Cup. With 13 points, they trail Iran by four and sit just one above Uzbekistan with three matches to play.

Only the top two nations will earn automatic berths, while the third-place team will have to go through a playoffs.

"Although I'm in a difficult situation, I was determined to join the national team, and personally, I've been preparing for the match," said Jang, who has 34 caps for South Korea with three goals. "I'm ready to give my utmost effort." 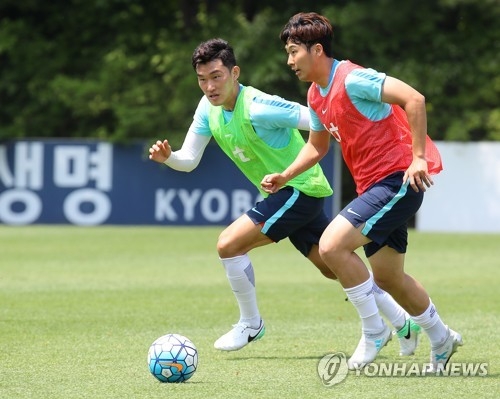