John C. Williams, President and CEO of the Federal Reserve Bank of San Francisco, said that three rate increases this year is a reasonable baseline view, but there is potential for upside occurrences in the economy.

"I could imagine if the economy strengthens, four rate increases this year would be appropriate," Williams said in a news conference in Seoul on the sidelines of an international conference hosted by the Bank of Korea.

He said the end point of the rate hike cycle is probably 2.75 or 3 percent. 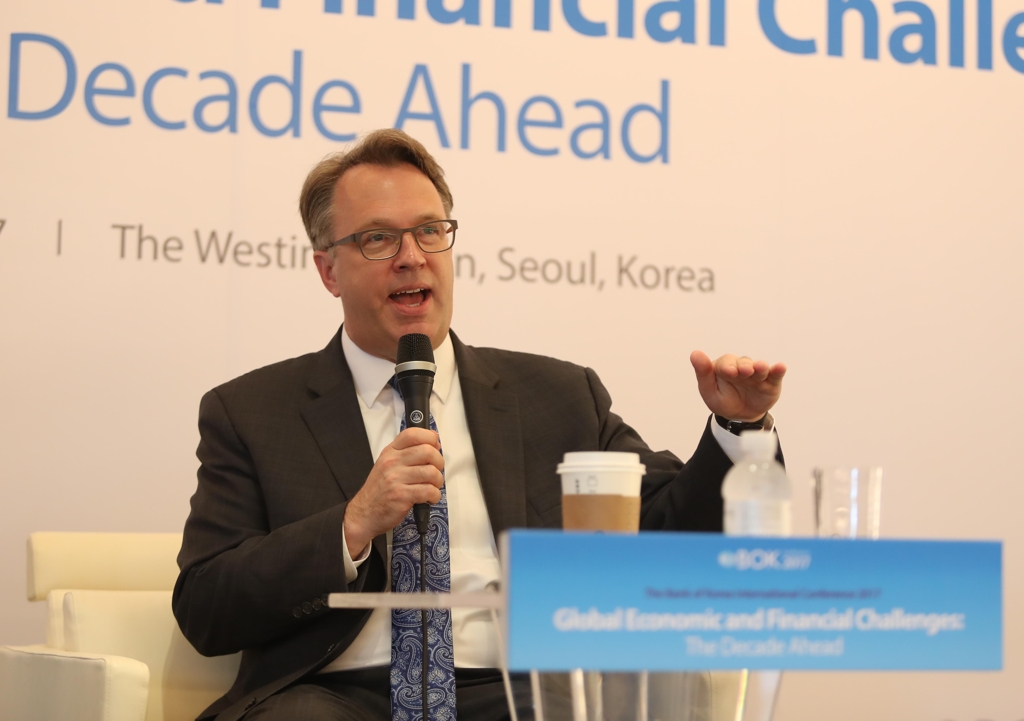 In March, the U.S. Federal Reserve raised its key rate by a quarter of a percentage point to a target range of 0.75 to 1 percent. It also signaled that additional hikes would be made in a gradual manner later this year.

Williams said the Fed is doing its best to communicate, explain and act in a gradual manner in raising rates, to reduce unnecessary and avoidable volatility in the global financial markets and global economy.

Last month, the Bank of Korea unanimously voted to keep the key rate at 1.25 percent, extending its wait-and-see approach for the 11th consecutive month.

BOK Gov. Lee Ju-yeol vowed not to "mechanically raise" the key rate in case of a U.S. rate hike.

On Thursday, Lee called for measures to cope with population aging that could undermine growth in Asia's fourth-largest economy, noting South Korea is not well-prepared for its rapidly increasing older population.

Experts have expressed concerns that the aging population, coupled with a low birthrate, poses a serious threat to South Korea, as it could lead to fewer working people and increased spending on health and welfare.

Last year, the number of South Koreans over 65 came to more than 6.76 million, accounting for 13.2 percent of all people living in the country, according to the statistics office. Nations become an "aged society" if people aged over 65 years make up 14 percent or more of the population.

Statistics Korea said people aged over 65 could reach more than 12.9 million, or 24.5 percent of South Korea's population, by 2030.

"The negative effects of population aging on growth seem likely to be substantial," Lee said in an opening address at the conference.

"In response to this, proper policy measures need to be put in place to ease the rapid drop in spending by seniors, while we at the same time strengthen social support related to childbirth and child care support."

South Korea has been trying to raise its birthrate, though no significant progress has been made yet, as many young people delay marriage amid a prolonged economic slowdown and the high cost of raising kids.

South Korea's total fertility rate -- the average number of children a woman bears in her lifetime -- stood at 1.25 in 2016, much lower than the replacement level of 2.1 that would keep South Korea's population of 51 million stable.