"We will take the lead in dealing with Korean Peninsula issues without relying on the role of foreign countries," Moon said in a congratulatory video message to the opening of the Jeju Forum, which kicked off a three-day run on this resort island. "We will launch an entirely renewed initiative and boldly implement it for lasting peace and prosperity on the Korean Peninsula."

He said South Korea will use persuasion and pressure against North Korea to ultimately bring the country to negotiations over its nuclear program.

"We will work with the international community. In cooperation with relevant countries, including the U.S. and China, we will bring North Korea out to dialogue through persuasion and pressure, and achieve the resolution of the North Korean nuclear issue, as well as improvements in inter-Korean relations and U.S.-North Korea relations," Moon said.

The recent series of missile launches by North Korea is a serious challenge not only for the Korean Peninsula but for international peace and stability, the president said.

"In the case that North Korea commits an armed provocation, I clearly pledge to preserve the peace by promptly and forcefully retaliating with the defense capabilities of both the Republic of Korea and the steadfast Korea-U.S. alliance."

As a human rights lawyer himself, Moon said he will also focus on increasing human rights conditions in North Korea.

"I will endeavor to enhance the human rights of the North Korean people without hesitation. In cooperation with the international community, I will urge the North Korean authorities to introduce changes to its policies and institutions."

The new government will also play its part in pursuing the peace and common prosperity of Northeast Asia, he said. 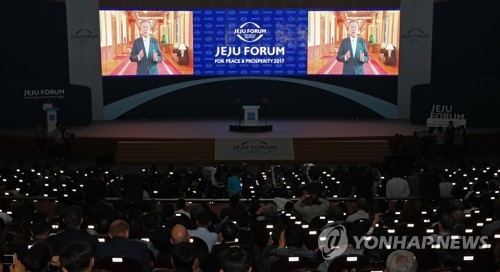