Ji played in all 34 league matches for Augsburg -- starting in 24 -- in the 2016-17 season. This is the first time that the 26-year-old appeared in all league matches since he moved to Europe in 2011. He also featured in two German Cup matches this past season.

Although he enjoyed an injury-free season, Ji said he wasn't entirely satisfied with his performance. In the 2016-17 season, he scored three goals and bagged three assists, which is not an impressive stat for an attacker.

"This is my first time completing a season without an injury," Ji said to reporters at the National Football Center in Paju, north of Seoul. "I played in all matches, but it's a pity that I couldn't get more goals or assists when I had opportunities."

Ji, who has also had stints with Sunderland and Borussia Dortmund, has not been a prolific goal scorer through his pro career. So far, his best single-season tally is 13 in 2010, when he made his pro debut with the South Korean club Jeonnam Dragons. With European clubs, Ji's personal best came during the 2012-13 season, when he had five goals in 17 matches with Augsburg.

Ji, who can also play as winger, failed to make a big impact with Augsburg as the season winded down. In the last two matches, he was able to play only one minute on the pitch.

Ji, however, said the next season will be different. He is contracted to Augsburg until June 2018.

"I think completing this past season without an injury will serve as a big source of energy for me to prepare for the next season," he said.

But before thinking about his club duty, Ji has the national team duty on the horizon. He is one of the 24 players called up by Uli Stielike with an eye on beating Qatar in the upcoming FIFA World Cup qualifier.

With only three matches remaining, the Taeguk Warriors are second in Group A in the final Asian qualifying round for the 2018 FIFA World Cup in Russia. With 13 points, they trail Iran by four and sit just one above Uzbekistan. Only the top two nations will earn automatic berths, while the third-place team will have to go through a playoffs.

South Korea will face Qatar in Doha on June 13 to stay in the automatic qualifying zone. South Korea, however, have yet to collect a win away from home in this qualifying round.

Ji, who has been training with the national team since Monday, said that the players are ready to end the drought.

"In every match, we've been giving our 100 percent effort to stay concentrated," he said. "Since this match is also important, we have to prove ourselves on the pitch, not just saying the words." 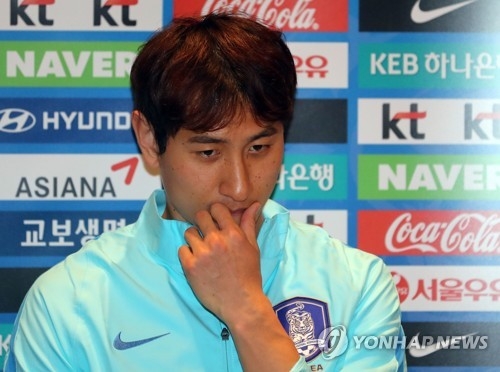