SEOUL, June 2 (Yonhap) -- Prosecutors on Friday sought a court warrant to formally arrest the daughter of former President Park Geun-hye's friend who was extradited from Denmark this week.

The Seoul Central District Court will hold a hearing at 2 p.m. to decide whether to issue the warrant for Chung Yoo-ra.

The 21-year-old daughter of Choi Soon-sil has been suspected of receiving inappropriate academic favors at Ewha Womans University and irregular funding for equestrian training from Samsung Group based on her mother's ties to the former leader.

Prosecutors are known to have accused Chung of obstruction of business, obstruction of duty and violation of the Foreign Exchange Control Act in the warrant sought.

If issued, they can put Chung in custody for up to 20 days and question her before filing formal charges.

Chung was sent back home Wednesday from Aalborg, Denmark, where she had been held at a detention center since January.

She was on Interpol's wanted list at the request of South Korean authorities after she repeatedly declined to respond to their summons in relation to an influence-peddling scandal that led to Park's ouster.

The scandal-ridden woman's extradition was accepted by a Danish court in April. She appealed the decision but then withdrew it last week.

During a brief news conference at the airport upon her arrival Wednesday, Chung denied any knowledge of the allegations raised against her, adding she does not know anything about what happened between her mother and Park. 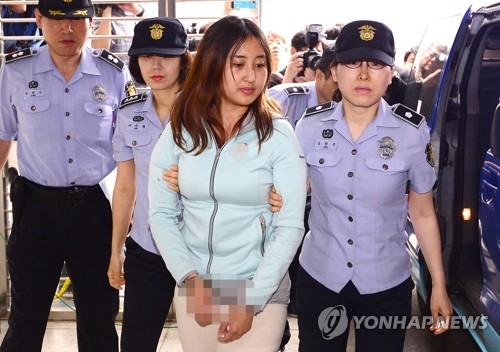