Kang Kyung-wha, who awaits a confirmation hearing next week, made the remarks during a meeting with officials of nonprofit organizations devoted to making humanitarian aid to countries in need.

"While taking stern action against the North's provocations, my opinion is that the humanitarian aid in the private sector should start immediately and discussion should also be launched about ways to resume government-level assistance as soon as possible," Kang was quoted as saying by those attending the meeting. 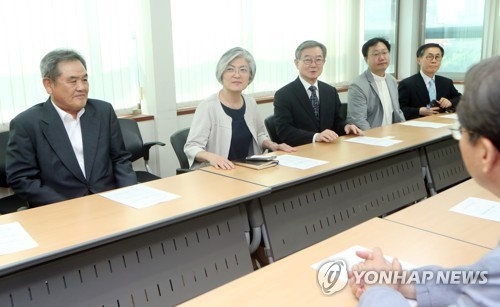 Known for her expertise in human rights and assistance programs at the United Nations for the past decade, Kang was tapped to lead the foreign ministry under the Moon Jae-in government which took office on May 10.

She made similar remarks upon returning home from New York last week. "It is a universal value to provide humanitarian aid to where human beings are suffering. It is also the principle of the U.N. to (seek) it separately from any political considerations, and I think that we should do so," Kang told reporters.

Her confirmation hearing is scheduled on Wednesday. Parliamentary approval is not required for her to take office.