South Korea came in at 43rd place with 703 points in FIFA world rankings for June, which is the same spot they've been in for the last two months. South Korea didn't play any matches in May.

Iran remained the highest-ranked Asian Football Confederation (AFC) member country at 30th, followed by South Korea, Japan (No. 45) and Australia (No. 48), the same order as in May.

Qatar, South Korea's next opponent in the final Asian qualifying round for the 2018 FIFA World Cup, was 88th, up one spot from the previous month. South Korea will take on Qatar in Doha on June 13 after playing a friendly match with No. 120-ranked Iraq in the United Arab Emirates next Wednesday.

Brazil remained at the top for the third consecutive month, followed by Argentina, Germany, Chile and Colombia. 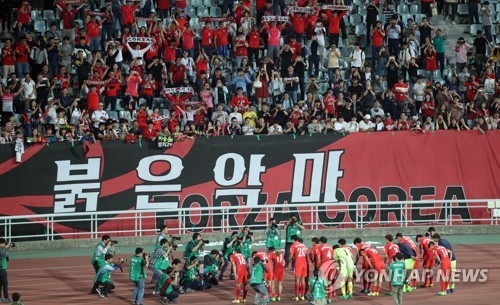