WASHINGTON/SEOUL, June 2 (Yonhap) -- The United States imposed fresh sanctions on North Korea on Thursday, blacklisting the regime's highest office, the State Affairs Commission, money-making firms and other entities and individuals as it further tightens the screws on Pyongyang over its nuclear and missile programs.

The sanctions came after a series of successful missile tests by North Korea in recent months that demonstrated steady progress in its pursuit of various types of missiles, including a nuclear-tipped intercontinental ballistic missile capable of reaching the U.S.

The Treasury Department measures targeted four individuals, including one Russian, as well as 10 entities, including the State Affairs Commission, the Korean People's Army and the Ministry of People's Armed Forces, for their roles in the country's weapons of mass destruction programs.

The commission is the North's highest office of state and leader Kim Jong-un rules the country as its chairman. 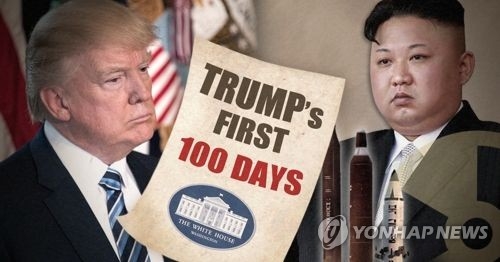 "Today's actions target North Korea's military, nuclear, and WMD programs, its revenue from labor, coal, and minerals, as well as its overseas financial operations," the Treasury said in a statement.

Under the sanctions, any property or interests in property of the designated persons in possession or control of U.S. persons or within the United States must be blocked, and U.S. persons are generally prohibited from doing business with them, it said.

"The United States will continue to target individuals and entities responsible for financing and supporting North Korea's nuclear weapons and ballistic missile programs, and will continue to increase pressure on this hostile regime," said John Smith, director of the Treasury's Office of Foreign Asset Control (OFAC).

"Treasury is working with our allies to counter networks that enable North Korea's destabilizing activities, and we urge our partners to take parallel steps to cut off their funding sources," he said.

The Treasury said that the State Affairs Commission is the North's "new supreme policy guidance organ" established under a revised constitution in 2016, and replaced the previously designated National Defense Commission.

The blacklisted North Korean entities and individuals also include Kim Su-Kwang, an official of the Reconnaissance General Bureau (RGB), the North's primary intelligence organization, which has already been blacklisted for involvement in various illicit activities.

The Korea Computer Center (KCC), a state-run IT research and development center, was sanctioned as it "generates money for the North Korean regime through software development and programming, including North Korea's 'Red Star' operating system," the Treasury said.

Songi Trading Co. was sanctioned for exporting North Korean coal, and the Korea Zinc Industrial Group for exporting zinc. Export of mineral resources has been a key source of hard currency for the destitute regime bent on its nuclear and missile programs.

Also added to the list was Ri Song-hyok, a Beijing-based official for U.S.-designated Koryo Bank and Koryo Credit Development Bank. Ri has reportedly established several front companies in order to procure items and conduct financial transactions on behalf of the North, the Treasury said.

Three Russian firms and one Russian individual were also sanctioned.

Moscow-based Ardis-Bearings LLC and its director, Igor Aleksandrovich Michurin, were sanctioned for their support to the North's Tangun Trading Corp., accused of WMD proliferation, while Independent Petroleum Co. was added to the list for providing oil and petroleum products to the North.

Also blacklisted was one of IPC's subsidiaries, AO NNK-Primornefteproduct.

South Korea's foreign ministry welcomed the latest action by the U.S., saying that it reaffirmed Washington's strong commitment to making the North nuclear-free.

It also said that the Seoul government will strengthen coordination with the U.S., Japan, China and the whole international community with a goal to induce the North to give up its nuclear weapons program through all possible means including both sanctions and talks.