WASHINGTON, June 1 (Yonhap) -- The full deployment of the U.S. THAAD missile defense system in South Korea could take more time than expected if a thorough assessment of its impact on the environment is to be completed, South Korea's national security adviser said Thursday.

The remark by Chung Eui-yong, chief of the National Security Office at the presidential office, Cheong Wa Dae, strongly suggests that Seoul intends to seek a full-scale environmental study before deploying the additional four launchers for a THAAD battery installed in southeastern South Korea.

"If we're going to conduct an environmental impact assessment, I think it may take more time than we originally expected," Chung told reporters upon arrival in Washington for talks with U.S. officials about the upcoming summit between President Moon Jae-in and U.S. President Donald Trump.

Chung also quoted Moon as saying during a meeting with visiting U.S. Sen. Dick Durbin (D-IL) earlier this week that there is a strong demand among South Korean people for a thorough environmental study.

The THAAD unit in South Korea reached its "initial operational capability" in late April after the U.S. brought in two launchers in early March. Four additional launchers have since arrived in South Korea to add to the system for full deployment aimed at intercepting North Korean missile attacks.

The arrival of the four additional launchers has emerged as a top political issue in South Korea following revelations the Defense Ministry deliberately omitted the fact in a report to the office of new President Moon. That raised allegations of a cover-up, with President Moon expressing frustration and ordering a probe into how the omission happened.

During the meeting Wednesday with Durbin, Moon stressed that the investigation is purely a domestic matter and is not aimed at reversing Seoul's decision to host the system or sending any other message to the United States.

Chung is also expected to give similar reassurances when he meets with U.S. National Security Advisor H.R. McMaster.

"It's terribly wrong that such an important report was omitted regardless of whether it was on purpose or by mistake," Chung told reporters in Washington. "We have to make sure to correct this."

Chung said the main purpose of his trip is to finalize Moon's trip to the U.S. and topics for the summit with Trump. 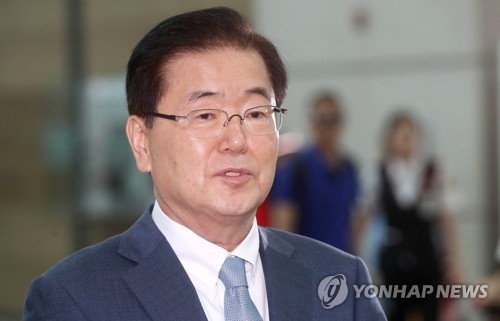