WASHINGTON, June 1 (Yonhap) -- U.S. President Donald Trump announced withdrawal Thursday from the landmark global agreement aimed at curbing climate change, claiming the deal is unfair to the U.S. and vowing to revise the accord on terms better for the country or negotiate a new pact.

"In order to fulfill my solemn duty to protect America and its citizens, the United States will withdraw from the Paris climate accord," Trump said during a nationally televised announcement, adding he would begin "negotiations to reenter either the Paris accord or a really entirely new transaction, on terms that are fair to the United States, its businesses, its workers, its people, its taxpayers."

Trump claimed the 2015 deal disadvantages the U.S. to the exclusive benefit of other countries, "leaving American workers, who I love, and taxpayers to absorb the cost in terms of lost jobs, lower wages, shuttered factories and vastly diminished economic production."

"As of today, the United States will cease all implementation of the nonbinding Paris accord and the draconian financial and economic burdens the agreement imposes on our country," he said. "This includes ending the implementation of the nationally determined contribution and, very importantly, the Green Climate Fund, which is costing the United States a vast fortune."

The GCF, launched in 2010, is a U.N. climate fund aimed at channeling money from industrialized nations to developing countries to help them tackle global warming and other problems related to climate change. Its secretariate is based in South Korea's Songdo, west of Seoul.

About 20 countries have pledged a total of $9.4 billion to the GCF. 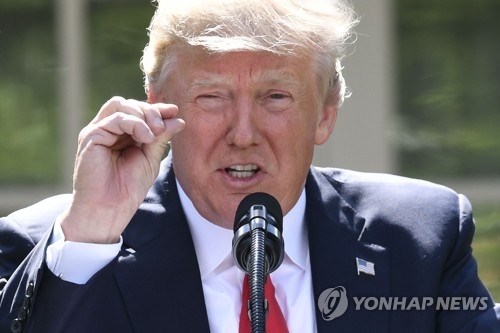