BUSAN, June 2 (Yonhap) -- For Lee Seung-hwan, director at art archiving company Aroute, creating content that can be easily shared and consumed online seems to be one -- if not the only -- way for Korean art to become more appealing to the public.

The five-strong company, which was founded in April 2015, is still in an early stage of development in the market. Yet, it has slowly made its presence felt among Korean artists who are eager to enhance their individual "brand" and tap into the ever-growing power of social media platforms to publicize their artwork.

"In Korea, art is still shared within a closed circle of art lovers. I felt the art consumer base (in Korea) was almost nil and that art could have broader appeal only when it became easily accessible on a mobile platform," Lee said during an interview with Yonhap News Agency on Thursday at the Busan Exhibition & Convention Center (BEXCO). His company is one of the exhibitors at the 6th Art Busan, an annual art fair taking place in the port city.

In order to expand the small pool of art consumers in Korea, Lee believed going mobile and marketing through social media sites were essential. 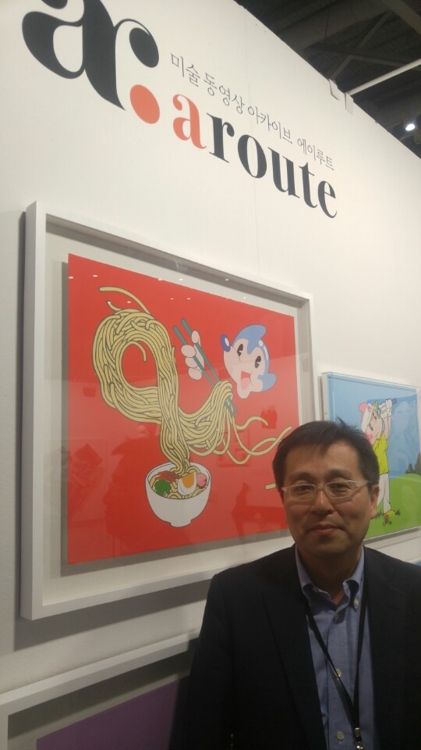 An art major at Seoul's Hongik University, he worked in the Korean art field for more than 20 years, including at Gana Art Magazine, which ceased publishing in 2000, and Seoul Auction, the country's biggest art auction house.

"When I was working at the auction company, I realized people were consuming artists more than their artwork. So it seemed only natural to me that an artist needs to build up their own brand by constantly exposing themselves to the public," he said.

The idea came into realization when the company started producing a short video clip where an invited artist is engaged in a light conversation with the hosts. So far, eight episodes have been published on the company's official website, which are mostly marketed and consumed on various social platforms.

"No matter how much money was spent in creating a video, it is no use if people don't watch it. Our goal is to make a clip that not only is cost-effective but also can make an artist connect with the viewers," Lee said.

It is still too early to determine whether the service is achieving its intended goals. But he has recently noticed that an increasing number of artists he meets has been already aware of the service. He hoped its nonconventional nature of being consumed online and the laid-back format would help artists feel comfortable to get engaged.

Besides the video archiving of artists, artwork and exhibitions, Aroute also works with artists to produce a limited number of print editions, out of belief that an affordable "entry" level when it comes to art collection is necessary, just like in a luxury brand.

"People start with a scarf when they buy Hermes. I think the same applies to art collection. There should be a reasonable artwork to begin with."

Lee, however, remains skeptical that art can become entirely popular culture as it has long been part of wealthy portfolios of the establishment who look only to grow the value of their possessions, not the other way around.

While he acknowledges the limitation, he still believes art shouldn't remain as a noble hobby of the privileged.

"Like we easily exchange our thoughts on wine," he said, "Anyone who has even the slightest interest in art should feel free to talk about art. Our mission is to make people feel art is easy."