Episodes 15 and 16 of "Ruler," which aired Thursday evening, recorded 12 percent and 13.6 percent viewerships, respectively, according to Nielsen Korea.

The show is broadcast in a new programming format in which a one-hour conventional TV episode is spliced into two half-hour airings with ads inserted into the middle.

The plot of "Ruler" revolves around a crown prince named Lee Seon of the Joseon Dynasty (1392-1910) -- played by rising star actor Yoo Seung-ho -- who has been raised wearing a mask since infancy to conceal his identity due to mysterious circumstances.

He wages a war against a technocratic guild known as "Pyeonsoohoe," which seeks to privatize the public water supply for personal gain.

Episodes 11 and 12 of SBS TV's romantic comedy "Suspicious Partner" clocked in at 8.4 percent and 9.3 percent, respectively, and Episode two of "Queen for Seven Days," a new KBS 2TV period drama, stood at 5.7 percent. 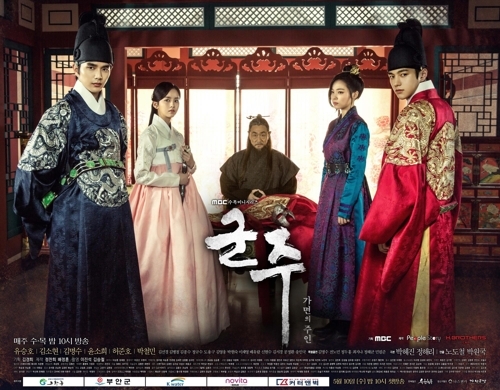