The three-day Asia Security Summit, also known as the Shanggri-La Dialogue, is slated to kick off at night with a special address by Australian Prime Minister Malcolm Turnbull.

Security guards, armed with rifles, were deployed around the venue, the Shangri-La Hotel in this city state. 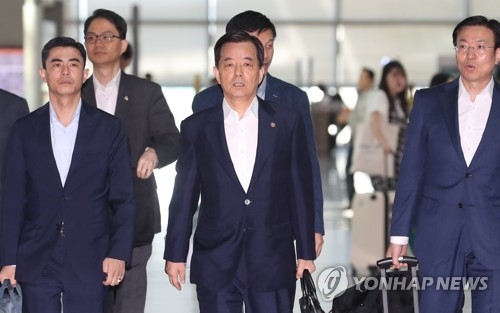 "The North Korea issue is traditionally a top agenda item of the annual conference," South Korea's Ambassador to Singapore Lee Sang-deok said, although the communist country has been absent from the forum launched in 2002.

Keen attention will also be paid to the Donald Trump administration's policy on Asia.

China has been stepping up efforts to improve relations with Southeast Asian countries after an era of Washington's "Asia rebalancing" or "Asia pivot" strategy under the Obama administration.

"Just as Northeast Asia, Southeast Asia is a spot for deep diplomatic rivalry between the U.S. and China," Lee pointed out.

The U.S. will be represented by Secretary of Defense Jim Mattis, with China sending a military general as its chief delegate.

China is expected to maintain a relatively low-key approach on the South China Sea issue at this year's session.

He is scheduled to arrive here in the afternoon and soon start official activities with bilateral meetings with his Australian and Indonesian counterparts.

Organized by the International Institute for Strategic Studies (IISS), a British think tank, the Shanggri-La Dialogue draws defense ministers, military chiefs and other representatives from Asia, Europe and America.

It involves defense ministers, military chiefs and other representatives from Asia, Europe and America. More than 30 countries participated in last year's meeting.