The 16th Asia Security Summit also involves U.S. Secretary of Defense Jim Mattis and two dozen other ministerial-level officials from around the world.

The three-day forum, better known as the Shanggri-La Dialogue, will open Friday night, coming on the heels of a series of North Korea's ballistic missile launches.

Han plans to exchange views on ways to address the North Korea issue, and promote peace and stability, especially in Asia.

He will first hold bilateral talks with his Australian and Indonesian counterparts -- Marise Payne and Ryamizard Ryacudu -- before joining the opening reception, according to his ministry. 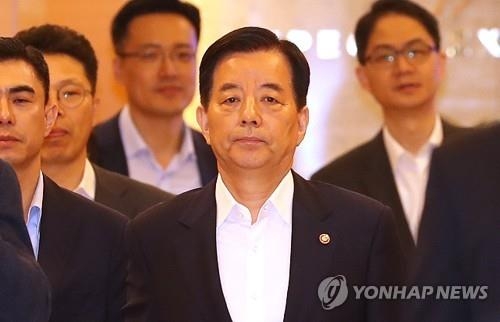 It would be their first meeting since the launch of South Korea's liberal Moon Jae-in administration critical of its predecessor's decision on THAAD.

The U.S. secretary's speech on Saturday morning at the first plenary session may offer some details of the Trump administration's defense and security policy for the Asia-Pacific region.

Indeed, officials said North Korea and the Trump administration's approach toward Asia will be in the spotlight in this year's Shanggri-La Dialogue.

"The North Korea issue is traditionally a top agenda item of the annual conference," South Korea's Ambassador to Singapore Lee Sang-deok said, although the communist country has been absent from the forum launched in 2002.

China has been stepping up efforts to improve relations with Southeast Asian countries after an era of Washington's "Asia rebalancing" or "Asia pivot" strategy under the Obama administration.

"Just as Northeast Asia, Southeast Asia is a spot for deep diplomatic rivalry between the U.S. and China," Lee pointed out.

China is expected to take a relatively low-key approach on the South China Sea issue in the upcoming event, as it has dispatched a military general as its chief delegate.

Organized by the International Institute for Strategic Studies (IISS), a British think tank, this year's forum will be attended by some 23 ministerial-level delegates and 12 chiefs of the defense force, as well as senior defense officials and academics from 40 countries.