Mobile transactions through smartphones and tablets reached 3.68 trillion won (US$3.28 billion) in April, surging 42.2 percent from a year earlier, according to the data by Statistics Korea.

The amount was equal to 60.6 percent of all online purchases made in the cited month that reached 6.08 trillion won, and outpaced the earlier record of 59 percent set in March.

Mobile purchases in South Korea have been on a steep rise for years as a growing number of people are spending more on their smart devices.

The percentage of mobile transactions within total online sales was in the 40-percent range in 2015 and went up to the 50-percent level in 2016 before rising to the 60 percent range this year.

At the same time, the monthly value of mobile transactions has been also on a roll to reach an all-time high of 3.74 trillion won in March this year.

In April, mobile bookings for travel and movie tickets soared 32.9 percent from a year earlier to 509.6 billion won, while mobile sales and deliveries of foodstuffs shot up 68.8 percent on-year to 547.5 billion won.

Sales of clothes surged 40.1 percent to 439.8 billion won, while 300.8 billion won worth of cosmetics were sold through smartphones, up 37.2 percent on-year. 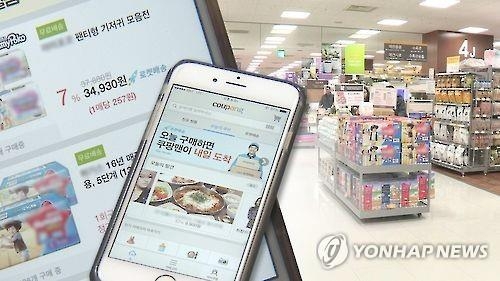