POHANG, South Korea, June 2 (Yonhap) -- A fishing boat with two people aboard capsized off the southeastern coast of South Korea on Friday, leaving one of them dead, local Coast Guard authorities said.

In the 6:23 a.m. accident 100 meters off Cape Homi in Pohang, North Gyeongsang Province, a 70-year-old fisherman went missing and his wife, 69, managed to swim ashore.

The Coast Guard, which mobilized five patrol ships and a helicopter, found and rescued the missing fisherman about one hour following the accident, but he was confirmed dead at a nearby hospital.

At the time of the accident, there were high waves of 1.5 to 2 meters in the area, they said. 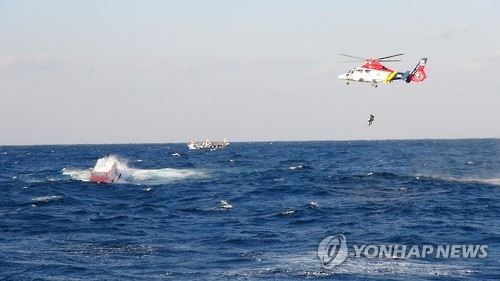