SEOUL, June 2 (Yonhap) -- The sales growth of South Korean cosmetics products slowed in April from a year earlier, due largely to a decline in Chinese tourists who are the main customers for local beauty items, data showed Friday.

The index gauging the retail sale of cosmetics products grew 2.2 percent in April from the previous year, the lowest growth since the figure marked negative 7.1 percent in August 2015, according to the data by Statistics Korea.

That month the country suffered from the aftermath of the Middle East Respiratory Syndrome (MERS) outbreak.

The 2 percent range expansion draws contrast to the surge in the retail sales index for last year, during which it posted 5.6 percent growth in February, 11.4 percent in March and continued its double-digit number for the rest of the year.

The slowdown in the retail cosmetics sales is largely a result of a steep fall in the number of Chinese visitors, which tumbled nearly 67 percent in April alone, following China's ban on selling Korea-bound trips.

Beijing began imposing the restriction in mid-March in protest of Seoul's deployment of a U.S. anti-missile system or THAAD on its soil. The decision on THAAD has stirred the wrath of China, which claims that it undermines regional security.

The amount of retail cosmetics sales reached 1.65 trillion won (US$1.47 billion) in April, hitting a nine-month low, the data showed. 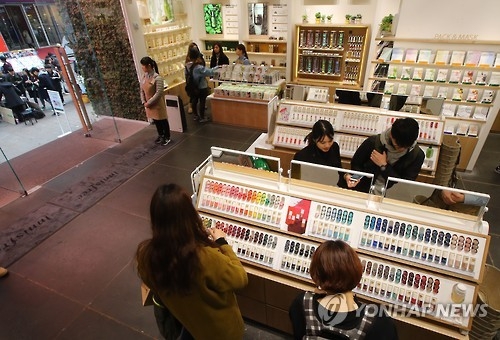