SEOUL, June 2 (Yonhap) -- President Moon Jae-in's policy advisory panel said Friday that it is mulling reversing its earlier position to put the foreign ministry back in charge of trade issues, though it has yet to make any decision.

Park Kwang-on, the spokesman for the State Affairs Planning Advisory Committee, said that it is expected to make the decision early next week on whether the trade function will be transferred to the Ministry of Foreign Affairs from the Ministry of Trade, Industry and Energy.

"We are discussing it in that direction (in favor of retaining the trade function under the industry ministry)," he said during a regular briefing.

"But given that we need to have further consultations over the issue, it is premature to say that we have reached a final decision," he added.

Last week, the committee said it would submit to parliament a government reorganization proposal that involves reinstalling the trade function in the foreign ministry.

Under the former government, the trade function of the foreign ministry was moved to the industry ministry, although critics argued that diplomats' hard-earned expertise in trade negotiations with foreign counterparts should not be neglected. 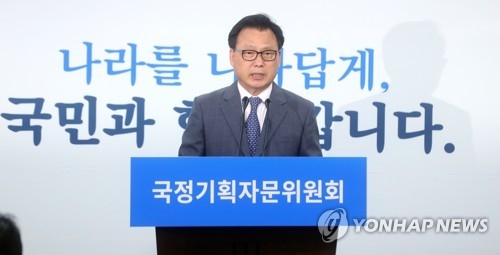