MOKPO, South Korea, June 2 (Yonhap) -- A set of bones found intact in the wreck of the Sewol ferry last month was confirmed to be those of a student who went missing in the 2014 disaster through a DNA test, officials said Friday.

The remains, first identified as those of Heo Da-yoon based on dental records last month, have been officially confirmed to be hers by a DNA test, they said.

Three people have been identified based on the remains found since the search operations for nine people who were unaccounted for began April 18.

Another set of remains found last month have been confirmed to be those of student Cho Eun-hwa and a bone fragment found near the site of the sinking the same month was also identified to be that of missing teacher Ko Chang-seok.

The 6,800-ton Sewol ferry sank off the country's southwestern coast near Jindo Island on April 16, 2014, claiming the lives of 304 people, mostly high school students on a school excursion.

The hull was raised from the bottom of the sea and put into dry dock at a local port in Mokpo, some 410 kilometers south of Seoul, in April. 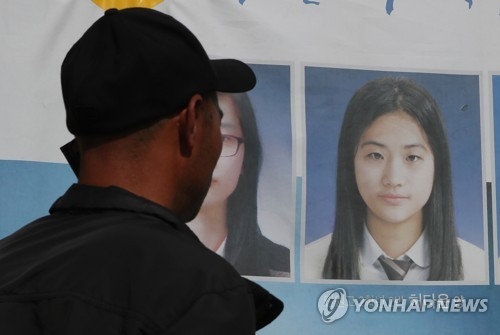