SEOUL, June 3 (Yonhap) -- A court in Seoul rejected an arrest warrant for the daughter of former President Park Geun-hye's long-time friend in a setback to the investigation into a massive influence-peddling scandal that led to Park's ouster from office.

The Seoul Central District Court turned down the prosecution's request to formally arrest Chung Yoo-ra, the 21-year-old daughter of Choi Soon-sil, saying it's difficult to recognize the reason and the need for her arrest at this point.

Chung, who was extradited from Denmark earlier this week, was immediately freed from custody.

She has been accused of receiving undue admission and grading favors from Seoul-based Ewha Woman's University and irregular funding for equestrian training from Samsung Group based on her mother's ties to Park.

Chung was on Interpol's wanted list at the request of South Korean authorities after she repeatedly denied to respond to their summons. The extradition was accepted by a Danish court in April. She appealed the decision but then withdrew it last week.

Chung has so far denied any knowledge of the allegations raised against her, saying that she does not know anything that went on between her mother and Park. 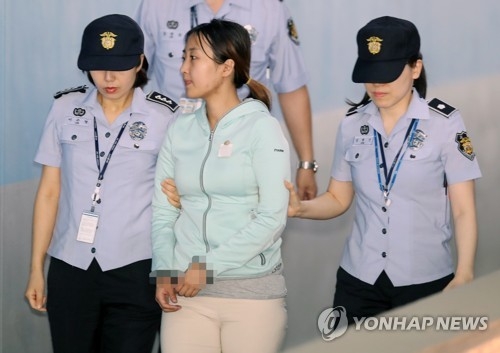 "I'm truly sorry for having caused so much concern to many. I'm truly sorry. I will faithfully face the investigation by prosecutors," Chung told reporters after leaving the court following an hours-long deliberation by a judge.

Chung also expressed regret for not being able to answer questions from the media.

"There are things I'm not aware of. I don't necessarily see myself as being victimized but there are times when I ask myself 'Why didn't I know about this?'" Chung said.