JEJU ISLAND, June 2 (Yonhap) -- A former head of the United Nations' landmark inquiry into North Korea's human rights abuses said he will not rest contently until action is taken to make the North's rights abusers stand trial at the International Criminal Court.

Michael Kirby, a retired Australian justice who formerly headed the U.N. Commission of Inquiry (COI) that looked into the North's human rights violations, urged new South Korean President Moon Jae-in to open international negotiations to bring North Korean abusers to justice in an interview held on Thursday on the sidelines of the Jeju Forum.

Under Kirby's lead, the COI issued a report in 2014 accusing the North Korean leadership of systemically violating human rights, the U.N.'s first official documentation of the situation in the isolated country.

"(The) Challenges of North Korea are certainly the greatest challenges I have faced from the human rights point of view in my life," the 78-year-old former chairman said. "I would be just as happy to retire gracefully and get on my life ... but once you get involved in the issues of the Korean Peninsula, the pain and suffering of the Korean people on both sides of the demilitarized zone, it's difficult to just brush it aside and forget about it," he noted.

"The world knows what is going on, what is wrong and what should be done. And I will not rest contented in my life until the report is followed up, action is taken and the human rights of the people of North Korea restored."

Based on the 2014 report, a U.S. General Assembly resolution urged the U.N. Security Council to invoke its authority to refer the case to the ICC, but the council fell short of reaching an agreement.

"If a country is not a party to the statute of (the ICC), there is another way by which a matter can get into the jurisdiction of the ICC, that is by the referral by the security council... It should be done in the case of North Korea (like Darfur and Libya) because the ICC was already set up, it has staff, prosecutors, got resources and it has jurisdiction that is relevant," according to Kirby.

He said he hopes the Moon administration takes the lead in bringing up global negotiations needed to proceed with the action.

"That depends upon negotiations that I hope will be opened up by President Moon and his new administration."

Referring to Moon's pledge to improve the human rights conditions of North Korea in his video speech at the forum, Kirby said, "It was so interesting that the only person in the opening session of the Jeju forum 2017 who mentioned human rights was President Moon Jae-in.

"So I don't think he's going to take his eyes off this human right issue. Of course there are difficulties in securing, at the one hand, the improvement of the security situation and on the other hand improving the situation of human rights but that is the challenge for the international community and we don't make that challenge any closer to resolution by ignoring the issues of human rights," he also said.

Referring to North Korea's chain of ballistic missile launches, he said they are not "helpful" to Moon's North Korean approach as well as in the context of its human rights situation.

"It is essentially provocation and it is rebuff to attempt to reach a new accommodation with North Korea," he said.

"But it's early days here and we will have to see how this plays out (although) it's not a helpful development from the point of security or human rights." 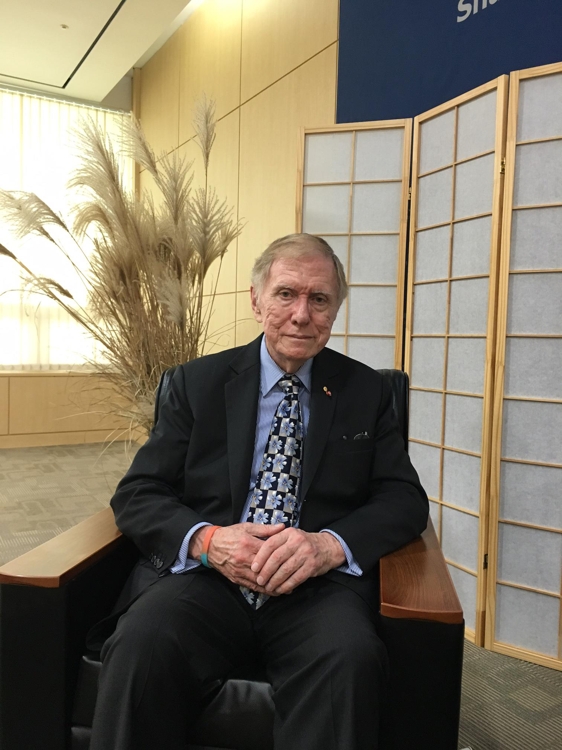