Ki is one of the 24 members called up by head coach Uli Stielike for South Korea's crucial World Cup qualifier against Qatar in Doha on June 13.

With only three matches remaining, South Korea are second in Group A in the final Asian qualifying round for the FIFA World Cup in Russia. With 13 points from four wins, one draw and two losses, they trail Iran by four points and sit just one point above Uzbekistan.

Only the top two nations will earn automatic berths, while the third-place team will have to go through a playoffs.

"If we return home with a victory, I think the national team can rebound," Ki said to reporters at the National Football Center in Paju, north of Seoul, where the Taeguk Warriors have been training since Monday. "We need to make the match a turning point for us, and that's why the result matters so much this time."

South Korea have yet to show a crowd-pleasing performance in the final round. All of their four wins have been determined by one goal, and they have yet to collect a win away from home.

"We know that we have been receiving cold stares from the fans because we have failed to show a dominant performance," he said. "But we've always had difficult times, so we're not worried. We will not let our guard down and will go for the victory."

Ki, who is with Swansea City in the English Premier League, said every player on the national team should stay focused until the end. The former Celtic and Sunderland midfielder added that the team atmosphere is great and all of the players are determined to win.

"If we show the talents we have, there are no opponents that we have to be afraid of," he said. "But we have yet to show that on the pitch."

Before traveling to Doha, Stielike's side will play a tune-up match against Iraq in the United Arab Emirates on June 7. They will depart for the Middle East country on Saturday.

Ki is 28 years old but is considered a national team veteran after having his national team debut in March 2007. He has so far scored nine goals in 91 international matches.

"Ten years ago, I didn't have much concerns since there were many veteran players on the team, but now, I'm the captain, and I have to think about what I should do to help young players," he said. "We are all ready to wash off our poor performances in the past with a victory over Qatar." 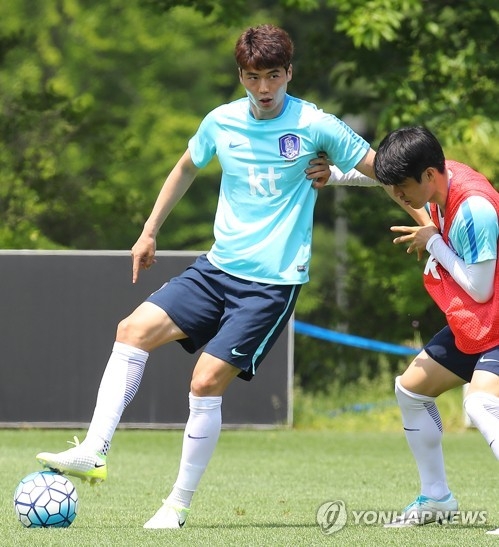