Ban said he will gladly offer his views whenever asked, they added.

"(I) will gladly respond to the president and the new government's request for advice at any time," the former U.N. chief said, according to Cheong Wa Dae spokesman Park Soo-hyun. 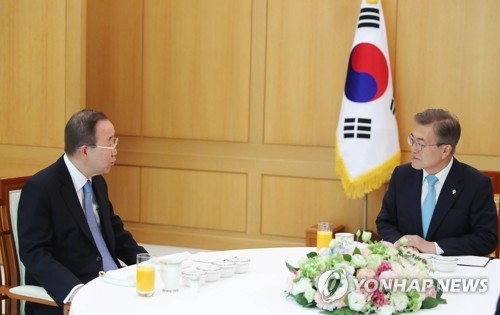 The remarks came at a meeting over lunch at Cheong Wa Dae, where the spokesman was also present.

They also came in response to the president's request for Ban to lend his wisdom and experience.

"I am worried about our diplomacy and there are many urgent issues," the president was quoted as saying.

The urgent issues for which Moon sought the former U.N. chief's advice included the controversy over the deployment of the U.S. THAAD missile defense system in South Korea, according to Park.

Ban did offer his advice, but asked the details of his discussion and advice for Moon regarding the THAAD issue be withheld from being published, the spokesman said.

In a phone conversation days after Moon's inauguration in May, Ban had offered to assist the new administration in any way possible.

Ban, a former South Korean foreign minister, was seen as a potential presidential candidate before he renounced his ambitions and left the country in April to teach as a visiting professor at Harvard University.

He returned home for a visit on Thursday.