South Korea will take on Qatar in Doha on June 13 in the final Asian qualifying round for the 2018 FIFA World Cup. With only three matches remaining, South Korea are second in Group A with 13 points from four wins, one draw and two losses. They trail Iran by four points and sit just one point above Uzbekistan.

Only the top two nations will earn automatic berths, while the third-place team will have to go through playoffs. Qatar are already eliminated from the World Cup berth contention as they sit at the bottom of the six-team group with one win, one draw and five losses.

South Korea have yet to collect a win away from home in the final round, but for this crucial qualifier, Stielike said his team will prevail with good quality of passes.

"In modern football, quick passing game is essential," he said at the National Football Center (NFC) in Paju, north of Seoul. "Not many teams allow space, so you need to overcome pressing from the opponents with quick passes."

Stielike said speed is not the only thing it matters, but the players also need to concentrate to deliver accurate passes to their teammates.

"We've been always playing with a ball possession of at least 60 percent," he said. "We need good quality of passes in the build up before finishing the attack. Once the ball is intercepted by the opponents, they will launch counterattack, so we need accurate and quick passes."

Stielike called up 24 players for the World Cup qualifier against Qatar and half of them have been training at the NFC since Monday, while others were not able to join due to their club duties. His squad will play a tune-up match against Iraq next Wednesday before taking on Qatar.

"The players voluntarily participated the training because they all wanted to work hard to win," he said. "Kim Jin-su even had a wedding, but he never skipped training."

Stielike said the players focused on improving their stamina through training, using a Global Positioning System (GPS) device. The German said his team will not disappoint fans this time.

"I hope football fans support and trust us once again," he said. "I believe my players, and they will have to play good game, but if they can get more energy from fans, they will do better and we can go to the World Cup." 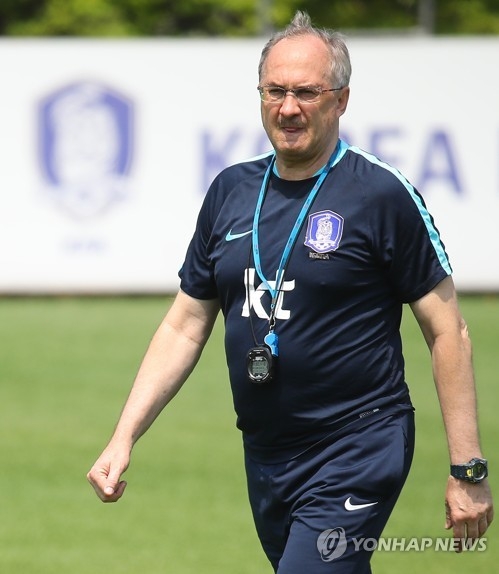