SEOUL, June 2 (Yonhap) -- The nation's top court has confirmed the designation of a nonprofit subsidiary of a law firm as the guardian of the founder of the country's retail giant Lotte Group, legal sources said Friday.

The Supreme Court on Thursday dismissed an appeal filed by Shin Kyuk-ho against a family court's decision that put him under the Sun's legal supervision. It is a subsidiary of law firm One Law Partners that handles matters of public interest.

Following the court's ruling, the Sun has to submit a report on Shin's list of property within two months.

It will be given authority to manage Shin's property within the boundaries permitted by court and make key decisions on various issues ranging from receiving medical treatments to changing residence.

In December 2015, a younger sister of the Lotte founder filed a petition with the Seoul Family Court, seeking the designation of a legal guardian for Shin amid a bitter feud between his two sons over the managerial control of the conglomerate.

While the elder son, Dong-joo, claimed the Lotte Group founder handpicked him as the successor, Dong-bin insisted that his father was unable to make reasonable judgments due to mental health problems. The prolonged family feud virtually came to an end after the founder's second son and incumbent chief won shareholder support in March last year to tighten his grip on the group.

The family court also ruled in favor of the second son in August last year. Shin appealed the case with the same court, but it was also dismissed in January. 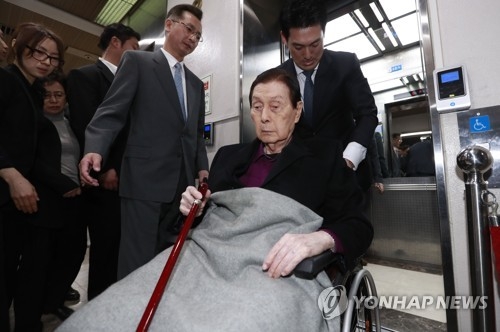