SEOUL, June 2 (Yonhap) -- Nearly 4 in 10 employed South Koreans in their late 30s and 60s are interested in second jobs after retirement or are currently making preparations to that end, a poll said Friday.

According to the survey of 1,213 people aged between 35 and 69, 30.1 percent of the respondents said they were interested in preparing to land new jobs after stopping their current work because it was considered necessary.

Another 9 percent answered they were seeking ways to prepare for post-retirement jobs or in the process of making specific preparations.

The remaining 60.9 percent said they were not preparing to land jobs after retirement as they didn't consider such efforts necessary.

The outcome of the survey, taken from Aug. 9-Sept. 9 last year, was carried in a report released by the Korea Institute for Health and Social Affairs. 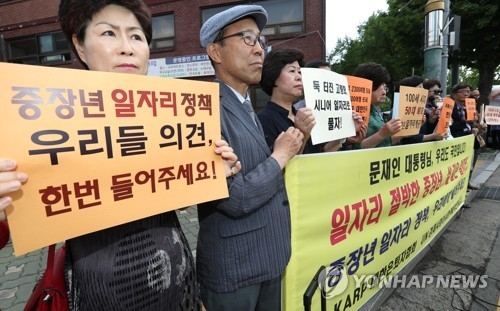 Analysts said the findings reflect the country's reality in which retired people should work to earn a living due to a lack of sufficient pension and welfare systems.

According to a recent government report, South Korean subscribers to the state pension program receive a monthly pension payment equivalent to 24 percent of their average monthly salaries during their overall working years.

In terms of market income that includes salaries and other income, South Korea's poverty rate for the elderly came to 63.3 percent in 2015, the highest among members of the Organization for Economic Cooperation and Development (OECD).

According to separate data from Statistics Korea in May 2016, 61.2 percent of South Koreans aged 56-79 wanted to work in the future, with 58 percent of them hoping to do so in order to help supplement their living costs.

As of 2015, the employment rate of South Koreans aged 65 or older reached 30.6 percent, the second highest among OECD member nations after Iceland's 38.7 percent. The OECD average stood at 13.8 percent.
(END)