The movie about enormous secrets and conspiracies of two men over Asia's largest casino has drawn much anticipation from Kim's fans for being his first film in four years since "Secretly Greatly."

Three members of the main cast -- Kim Soo-hyun, Sung Dong-il and Choi Jin-ri -- talked about their new film and had special time with their fans during the event at the New Millennium Hall of Seoul's Sungkyunkwan University. 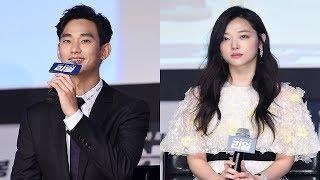