(ATTN: UPDATES throughout with more comments, details)
By Lee Chi-dong

They are scheduled to meet bilaterally on Saturday on the sidelines of the Asia Security Summit set to open in Singapore. 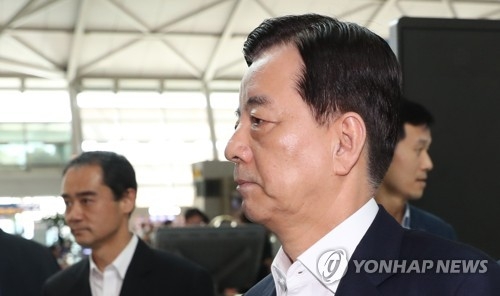 "With regard to THAAD, I will convey the president's such comments," the minister told reporters, as he arrived in Singapore to attend the so-called Shanggri-La Dialogue.

Han also said he plans to make clear that there will be "no change" in the agreement on THAAD deployment itself.

His remarks came amid widespread speculation that the installment of full THAAD equipment may be delayed. There's concern as well about a possible impact on the Seoul-Washington alliance.

South Korea's new liberal leader has been critical of his predecessor's decision on the THAAD deployment, saying it was made without public consent and due procedures at home. South Korean people are still split over whether THAAD is a must for the defense of the country against North Korea's missile threats.

The U.S. Forces Korea (USFK) has already stationed two THAAD interceptor launchers, together with a state-of-the-art X-band radar, at a former golf course in Seongju, about 300 kilometers southeast of Seoul, under the 2016 deal.

The USFK and South Korea's military said the THAAD system could reach full operational capability within this year.

Earlier this week, however, Moon expressed displeasure after belatedly learning that four more launchers already in South Korea are waiting to be bought to the THAAD site.

After an investigation ordered by Moon, the presidential office said Han's ministry intentionally concealed the presence of the additional launchers in the country.

Moon also apparently suspects that THAAD equipment is being deployed with an incomplete or flawed joint environmental survey of the site.

Moon's office, Cheong Wa Dae, said it's focusing on addressing issues related to domestic procedures and it does not want the move to spill over into any diplomatic dispute.