GGGI Director-General Frank Rijsberman said during an interview on Friday in Jeju Island that Korea is quite behind China and Japan in terms of clean energy use, urging the country to move toward renewable energy sources like the solar and wind, which are getting cheaper.

Last week, South Korea closed eight of its 10 coal-fired power plants in a one-month trial project aimed at improving the air quality of the country which has been gripped with fine dust.

Moon ordered the project less than one week after he took office on May 10. He is also moving to remove some older nuclear power plants.

"As a first step to say let's close them in June and see how we can move them out is very encouraging," the GGGI chief said in reaction to the shutdown.

"With the new government, there seems to be increased interest in switching to clean energy .... Everybody in Seoul is worried about air quality, so it's very encouraging that the new president seems to take this much more seriously."

But as the next big step, South Korea should change its plan to build eight new coal-fired power plants, he suggested, stressing that China and Japan are rapidly moving to do away with fossil fuel in comparison with South Korea.

"If you see both in terms of how much clean energy there is in the region, Korea is quite behind Japan and China," Rijsberman said. "The target for renewable energy in this country is also relatively modest. China is planning to bring renewable energy up to 80 pct (of entire energy consumption) by 2050. Very high partly because it's now the cheapest energy."

"Many countries are still saying coal is cheapest so we have to build coal (plants). So many governments in Asia still have big plans to build coal power plants. It's the same in Indonesia, Vietnam and Korea," he said. "So governments need to be informed."

"It's probably not possible to phase out coal-fired power plants and nuclear plants at the same time (in Korea) but building a new one that will last for thirty or forty years has become a very risky investment," he said, referring to scientists' prediction that by 2030 the grid will be the dominant form of energy production.

With its leading companies in solar panel and battery production, South Korea is also "well-placed" to take the lead in quick green energy transition and spur job creation, he also stressed.

"I think Korea has the big advantage of strong IT and technical companies. So I think Korea is and can be a real leader in smart grids and smart cities," he said.

The GGGI will also be there to help Korea more smoothly transfer to renewable energy, he said.

"So far Korea has mostly engaged with us by supporting our work financially and by sharing Korean experiences with other countries ... but in this area of moving to clean energy, I think there might also be experiences from other countries that are important for Korea."

Rijsberman took office in October for a four-year term as the director-general of the GGGI, which was officially launched as an intergovernmental organization in October 2012 in the South Korean capital. 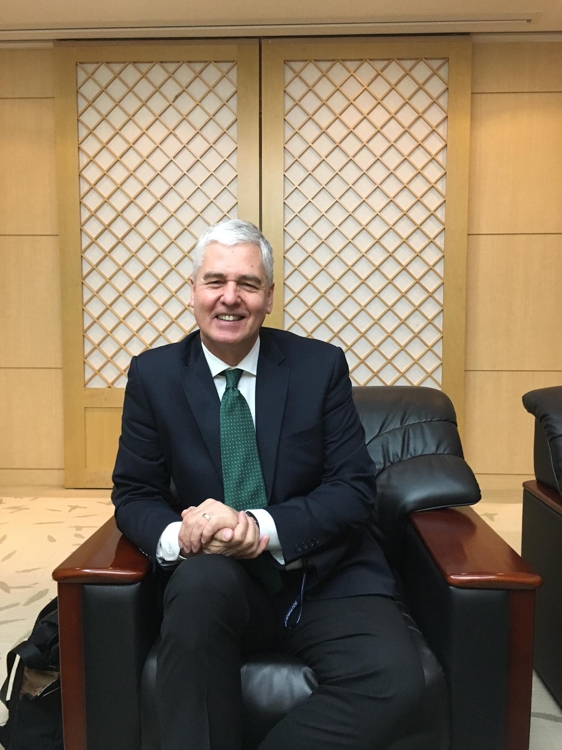