WASHINGTON, June 2 (Yonhap) -- The United States has consulted openly and transparently with South Korea throughout the process of bringing all six launchers for the THAAD missile defense system into the country, a senior Pentagon official said Friday.

"We have been consulting with the ROK government throughout this entire process to get the entire battery, THAAD battery to the Korean Peninsula, which includes six launchers," David Helvey, who is performing the duties of assistant secretary of defense, said at a Pentagon briefing.

"We've been very transparent with our ROK allies through this process," he said. 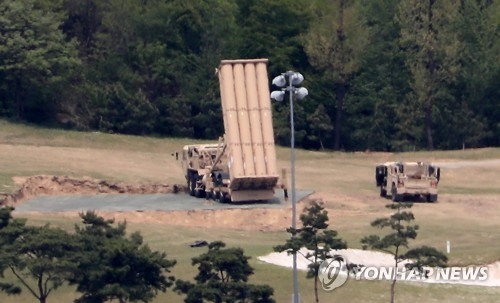 The U.S. brought in the first two of a total of six THAAD launchers in early March. Four additional launchers have since arrived in South Korea to add to the system for full deployment aimed at intercepting North Korean missile attacks.

The arrival of the four additional launchers has emerged as a top political issue in South Korea following revelations the Defense Ministry deliberately omitted the fact in a report to the office of new President Moon. That raised allegations of a cover-up, with Moon expressing frustration and ordering a probe into how the omission happened.

Moon has stressed, however, that the investigation is purely a domestic matter and is not aimed at reversing Seoul's decision to host the system or sending any other message to the United States.

"As you know here, this is a defensive capability that's intended to respond directly to the threat, the missile threat posed by North Korea to the United States, our forces that are forward deployed, our allies in South Korea, in Japan, in the region," he said.