SINGAPORE, June 3 (Yonhap) -- U.S. Secretary of Defense Jim Mattis said Saturday the deployment of the THAAD missile defense system is aimed at thwarting "real" threats from North Korea that have been gaining pace.

"I do not choose to send THAAD to South Korea and to protect the South Korean people from an imaginary problem. This is a real problem," Mattis said at a regional security forum under way in Singapore. "And the problem is not South Korea putting a purely defensive system for the defense of their own people. The problem is North Korea."

His speech was the highlight of the 16th Asia Security Summit, better known as the Shangri-La Dialogue named after its venue, as it offered some details of the Donald Trump administration's Asia security policy.

Mattis made it clear that the U.S. will place a top priority on resolving the North Korea issue on the basis of robust alliances with South Korea, Japan and Australia as well as cooperation with China.

"North Korea’s continued pursuit of nuclear weapons and the means to deliver them is not new, but the regime has increased the pace and scope of its efforts," he said. "The regime’s actions are manifestly illegal under international law. There is a strong international consensus that the current situation cannot continue." 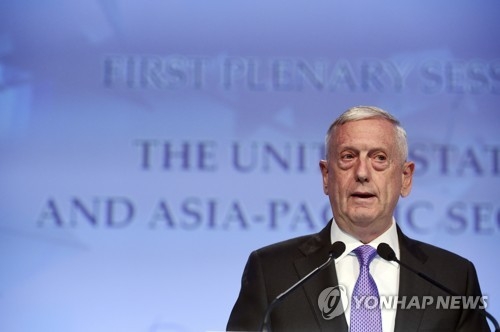 Hours earlier, the U.N. Security Council adopted another resolution against the North for its recent ballistic missile launchers, which calls for 15 more individuals and four entities linked to its weapons of mass destruction program to be added to the international sanctions blacklist.

"We are working transparently and in unison with the Republic of Korea (South Korea) to defend against growing threats posed by North Korea's aggressive and destabilizing nuclear weapons and ballistic missile programs," he said, probably mindful of a political controversy in South Korea that THAAD equipment has been delivered in a clandestine way that lacks public consent and due procedures including a joint environmental survey.

The South's new liberal administration of President Moon Jae-in is pushing to review the THAAD deployment decision made by its conservative predecessor.

China has also opposed THAAD, known for its powerful X-band radar, right on its doorstep.

Mattis, however, pointed out China is a key partner in efforts to deal with the North.

"Ultimately, we believe China will come to recognize North Korea as a strategic liability, not an asset -- a liability inciting increased disharmony and causing peace-loving populations in the region to increase defense spending," he said, urging Beijing to take concrete actions to address the North Korea issue.

The secretary said Washington's goal is not "regime change, adding it will instead increase "diplomatic and economic pressure" on the communist nation.