It marked an unusual declaration by a top Trump government official on its specific approach toward the region, while coordination with China remains a challenge especially on North Korea and wrangling over the South China Sea.

His government has jettisoned such symbolic expressions as "Asia rebalancing" or "Asia pivot" used by the Obama administration.

Speaking at the first plenary session of the 16th Asia Security Summit, Mattis presented a three-point strategy on the region by the Trump government. 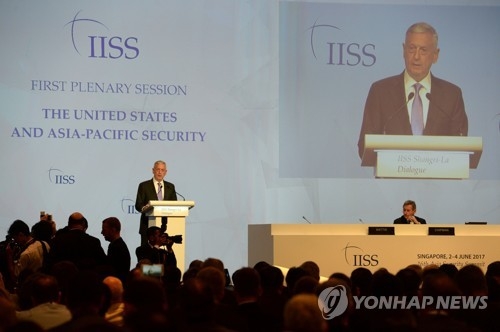 "Nations with strong allies that respect one another thrive and those without stagnate and wither," he said. "Alliances provide avenues for peace, fostering the conditions for economic growth with countries that share the same vision, while tempering the plans of those who would attack other nations or try to impose their will over the less powerful."

Secondly, the U.S. plans to step up efforts to empower other countries in Asia so that they can play a bigger role in their own peace and security.

For instance, he added, India is a potential major defense partner, along with Indonesia, Vietnam, Singapore and Taiwan.

In his address, he mentioned almost all Southeast Asian nations apparently in a gesture of goodwill.

"The future of ASEAN is bright, and that is good for all pacific nations," he said.

Currently, 60 percent of all U.S. naval ships, 55 percent of army forces, and about two-thirds of fleet marine forces are deployed to the Asia-Pacific region.

"Soon, 60 percent of overseas tactical aviation assets will be assigned to this theater," he said.

The Trump's administration's initiative is not without potential obstacles.

It has pressured Beijing to do more to rein in its provocative communist neighbor. China is virtually the single-remaining major ally of the North.

Mattis cited Chinese President Xi Jinping's earlier remarks that when all countries "come together from different directions, can the nuclear issues on the peninsula be resolved as quickly as possible."

He said, "Those words must be followed by actions."

He also took issue with China's construction activities in the South China Sea despite a longstanding territorial row with some neighboring Southeast Asian countries.

"We oppose countries militarizing artificial islands and enforcing excessive maritime claims unsupported by international law. We cannot and will not accept unilateral, coercive changes to the status quo," Mattis said.