"The Qatar (football team) is a low-ranking team but we can't consider them an easy opponent. It'll be a difficult match," Ki said to reporters at Incheon International Airport in Yeongjongdo, west of Seoul, before departing for Dubai with his team.

Ki is one of the 24 members called up by head coach Uli Stielike for South Korea's crucial World Cup qualifier against Qatar in Doha on June 13.

The national team is scheduled to hold a friendly match against Iraq in the United Arab Emirates on June 8 prior to the game with Qatar. 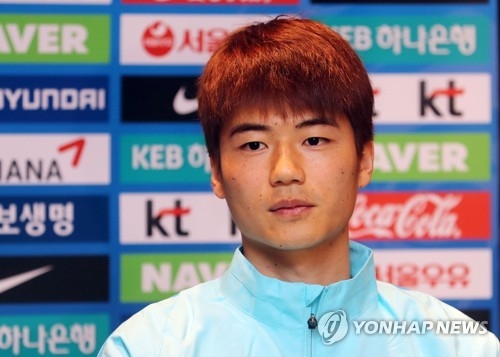 With only three matches remaining, South Korea are second in Group A in the final Asian qualifying round for the FIFA World Cup in Russia. With 13 points from four wins, one draw and two losses, they trail Iran by four points and sit just one point above Uzbekistan.

Only the top two nations will earn automatic berths, while the third-place team will have to go through playoffs.

"The national team lacks an away victory. We will try to win this time to raise our hopes," said Ki, who is with Swansea City in the English Premier League.

"The chances of winning are still enough. If we enjoy the game instead of being pressured by it, I think it will lead to good results."

The 28-year-old captain cited the hot weather as a key factor in the match against Qatar. "The weather in Qatar is very hot. It’s something we have never experienced so getting used to it is important," said Ki.