(ATTN: UPDATES throughout with details from sixth para)
By Lee Chi-dong

SINGAPORE, June 3 (Yonhap) -- South Korean Defense Minister Han Min-koo on Saturday assured his American counterpart Jim Mattis that Seoul is not seeking to reverse the existing deal on the deployment of THAAD.

In their bilateral talks here, Han said he explained a massive controversy in his country over the alleged lack of transparency in the process of the U.S. missile defense system being brought into the peninsula.

The minister stressed that it's "entirely about a domestic measure" and South Korea's new government is not trying to change the THAAD decision itself and send any "different message" to Washington.

In response, the Pentagon chief expressed the position that he "understands and trusts" that, according to Han who spoke with reporters shortly after the meeting held on the sideline of the Shangri-La Dialogue.

Han told Mattis that Seoul will resolve the problem based on the "alliance spirit."

Mattis did not speak separately to media. 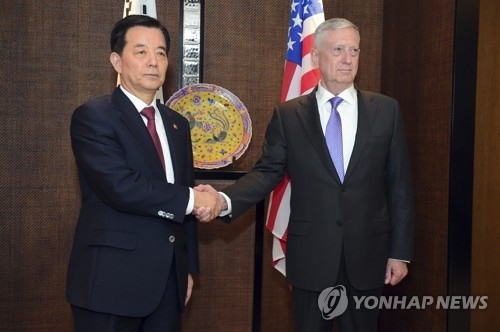 Their talks came amid growing doubts that the U.S. Forces Korea (USFK) will be able to put THAAD in full operation by the end of this year as planned.

Two THAAD interceptor launchers, together with a state-of-the-art X-band radar, have been installed at the site in Seongju, some 300 kilometers southeast of Seoul, under a 2016 deal between the allies endeavoring to counter North Korea's ballistic missile threats.

At issue is the delivery of four more launchers, as a THAAD battery requires at least six rocket launchers for effective operation.

But South Korean President Moo Jae-in, who took office on May 9, said he was not informed of the additional launchers until recently.

His office Cheong Wa Dae suspects that the defense ministry intentionally dropped the report to Moon who believes his predecessor struck the THAAD deal with the U.S. in a hasty move without due procedures at home including a joint environmental survey of the THAAD site.

Han's ministry has been under probe ordered by Moon.