SEOUL, June 3 (Yonhap) -- President Moon Jae-in's top security adviser returned to South Korea on Saturday after a two-day trip to the United States for talks with top Washington officials over Moon's upcoming summit with his U.S. counterpart and other alliance issues.

Chung Eui-yong, the National Security Office chief, arrived at Incheon International Airport, west of Seoul, after meeting with his U.S. counterpart H.R. McMaster at the White House to set up the summit.

South Korea and the U.S. agreed in principle last month to hold a summit between Moon and U.S. President Donald Trump in late June. Specific dates were discussed in Thursday's meeting, and the two sides are expected to finalize the dates in the near future and make an announcement at an appropriate time, a South Korean official earlier said.

Issues surrounding the deployment of the U.S. THAAD missile defense system, as well as military provocations from North Korea and the two countries' alliance are expected to be discussed during the summit.

The top security adviser will soon report the result of his trip to the U.S. to the president and notify the media of the details. 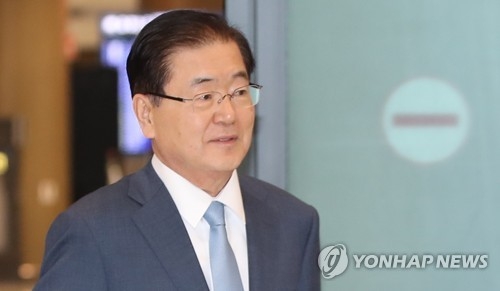