The meeting between Kang Kyung-wha, the first woman to be tapped for the job, and Ban was held in Seoul, according to the official at the Ministry of Foreign Affairs. Details of their discussions were not immediately disclosed.

"The meeting is known to have taken place naturally, as Kang and Ban know each other well from the experience of working together at the foreign ministry and the United Nations in the past," the official said.

Kang was an official in charge of international organizations affairs at the ministry from 2005 and 2006 when Ban was the country's top diplomat.

She joined the U.N. as the deputy high commissioner for human rights in 2006 and was appointed its assistant secretary-general for humanitarian affairs by Ban in 2013. Ban led the U.N. from 2006 to 2016.

The parliament is preparing to hold a confirmation hearing for Kang on Wednesday.

Saturday's meeting took place one day after the former U.N. chief met the country's president and promised support and advice for his administration.

The former South Korean foreign minister was seen as a potential presidential candidate before he renounced his ambitions and left the country in April to teach as a visiting professor at Harvard University.

He returned home for a visit on Thursday. 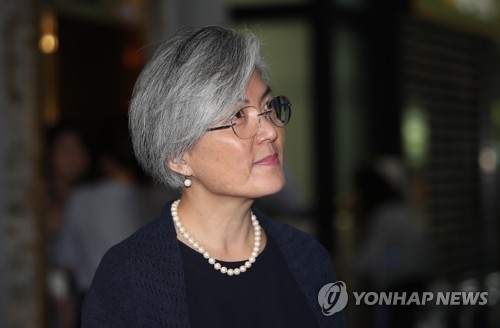