According to findings released by the Korea Automobile Manufacturers Association (KAMA) and local carmakers, outbound passenger vehicle shipments reached 829,852 units in the first four months of this year, down 1.4 percent compared to a year earlier.

Exports of cars made by Kia Motors Corp. and Renault Samsung Motors Co. moved up, but numbers for Hyundai Motor Co., GM Korea Co. and Ssangyong Motor Co. all backtracked.

Overseas sales of Kia and Renault Samsung rose 1.9 percent and 4.8 percent on-year, while those for Hyundai, South Korea's No. 1 carmaker, dropped 4 percent, with Ssangyong and GM Korea reporting losses of 18 percent and 3.8 percent each in the four-month period compared to the year before.

Despite the decrease in units exported, KAMA data showed the average price of cars shipped abroad by Hyundai surged 11.6 percent vis-a-vis the previous year to US$16,623. Sales figures bolstered by Hyundai's Genesis luxury sub-brand, which reported solid gains on demand for the G90 flagship sedan and its stablemate the G80. 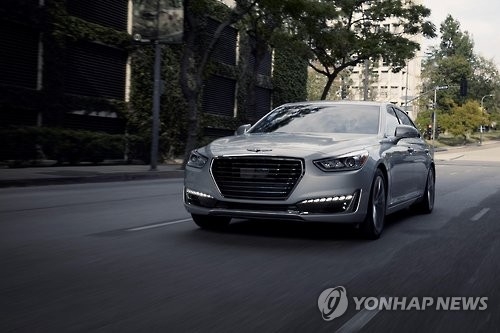 The automaker said exports of Hyundai's sports utility vehicles (SUVs) up till the end of April hit 12,066 units representing a 23.3 percent spike.

The average export price for Kia, which has a higher percentage of SUVs in its lineup compared to sister company Hyundai, jumped 8.5 percent on-year to $14,683, with corresponding figures for Renault Samsung rising 9.1 percent to $15,959.

On the negative side, the unit price for Ssangyong and GM Korea was down 0.4 percent and 5.9 percent.

Industry insiders said the rise in price is a positive development for local carmaking original equipment manufacturers that will be able to make more money and is a sign that the cars they are selling are more high-end.

"Such developments are all good for the bottom line of local companies going forward," an observer said.

Unit price of S. Korean cars goes up amid drop in export volume

Unit price of S. Korean cars goes up amid drop in export volume