Han said his "talking points" in the discussion with Mattis held in Singapore a day earlier were decided in "consultations" with Moon's office Cheong Wa Dae.

The one-on-one meeting between Han and Mattis came amid renewed attention on Seoul's stance towards the agreed-upon deployment of the advanced missile defense system by U.S. Forces Korea.

Han and his ministry have come under fire for allegedly bypassing a report of THAAD equipment in South Korea to its new president Moon Jae-in. Han was appointed by Moon's ousted predecessor Park Geun-hye.

Moon has ordered an investigation into the ministry's implementation of the deal with the U.S. on THAAD.

Meeting with the U.S. secretary on the sidelines of the Shanggri-La Dialogue, a regional security forum, Han assured his counterpart that it's "entirely about a domestic measure" and Seoul does not want it to affect relations with Washington.

He added the Moon administration would handle the THAAD issue in light of the "alliance spirit." In response, Mattis said he "understands and trusts" Seoul's stance on the matter.

Han told reporters later that his remarks on THAAD in talks with Mattis were based on a "summary" of Moon's public comments related to the missile defense system's deployment. 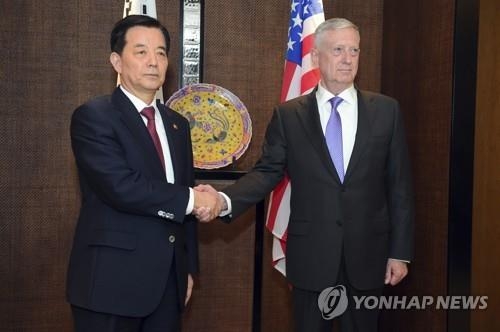