SEOUL, June 4 (Yonhap) -- President Moon Jae-in reaffirmed his commitment to creating new jobs Sunday, vowing to make sure that every penny the government spends will contribute to expanding employment opportunities.

"Jobs are growth and welfare. We need to be happy when working. We must expand our income so we will also be happy when spending. Jobs are where a happy life starts," the president said in his official greetings posted on the web site of the new presidential committee on job creation, which opened Sunday.

"I established the committee on job creation to keep my promise to become a president of jobs. I assumed the chairmanship of the committee believing that the government must be the largest employer to create new jobs," he added.

The president earlier vowed to create up to 810,000 new jobs in the public sector over his five-year presidential term.

"Cheong Wa Dae will now become an incubator for new jobs. We will make sure every won in government budget will lead to creating jobs," he said.

Moon ordered the setup of a new presidential committee on jobs in his first executive order issued the same day he was inaugurated on May 10.

Also highlighting his emphasis on creating new jobs, the chief executive has installed two large panels displaying the country's job market conditions in his own office. 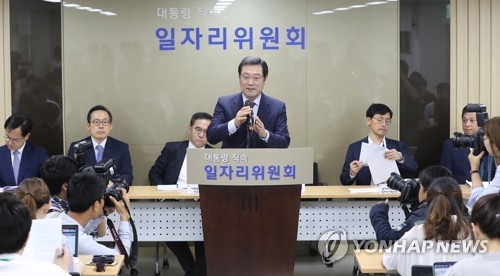 The job market conditions, also available on the committee's web site at www.jobs.go.kr, showed the country's employment rate stood at 66.6 percent in April, up 0.9 percentage point from a year earlier but lower than 2015 average of 67.7 percent for OECD countries.

As of April, the country's jobless rate stood at 4.2 percent.

However, the jobless rate of its younger people aged 15-29 years was at 11.2 percent, the highest reading for April since the government began compiling such data in 1999.

(LEAD) Moon vows to use every penny to create new jobs

(LEAD) Moon vows to use every penny to create new jobs