SINGAPORE, June 4 (Yonhap) -- North Korea has been in the spotlight at the forum here of top defense officials from around the world, reflecting increased global concern about its military threats, officials here said Sunday.

"The biggest characteristics of the session this time is that more attention has been paid to the North Korean nuclear and missile issue than in the previous ones," said South Korean Defense Minister Han Min-koo.

The policymaker is leading Seoul's defense delegation to the 16th Asia Security Summit, better known as the Shanggri-La Dialogue (SLD), named after the hotel in this city-state used for its venue.

It's the third straight year that Han is attending the conference as South Korea's defense chief and his last.

The minister is expected to be replaced soon in a Cabinet shake-up by the nation's new leader Moon Jae-in. 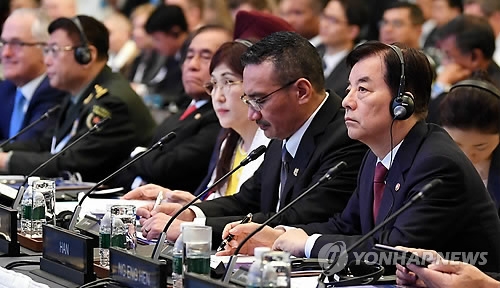 This year's SLD was joined by some 23 ministerial-level delegates and 12 chiefs of the defense force, as well as senior defense officials and academics from more than 40 countries, according to the International Institute for Strategic Studies (IISS), a British think tank that has been organizing the gathering.

With the three-day forum set to end Sunday, Han said many participating countries have had "in-depth" consultations on the seriousness of the North Korea issue, the importance of closer international cooperation, and the need for China to play an active role in addressing the problem.

"It shows that the international community... perceives North Korea's threats as not only a Korean Peninsula issue but also a direct challenge to the entire world," Han said.

Experts agreed that its threats are getting out of control.

"North Korea's testing tempo of increasingly powerful nuclear and missile capabilities has triggered no end of alarmist reactions. There are no good policy options for dealing with North Korea," said Mark Fitzpatrick, a senior researcher at the IISS.

In contrast, the focus on the territorial spat over the South China Sea, another hot topic in the SLD, has been less intense amid a low-key approach by Chinese delegates.

Han said North Korea was also at the top of the agenda in separate talks with his American, Japanese, Australian, Indonesian, Canadian and New Zealand counterparts on the sidelines of the conference.

In a bilateral meeting with U.S. Secretary of Defense Jim Mattis on Saturday, the minister delivered the Moon Jae-in administration's position on the Terminal High Altitude Area Defense (THAAD) system being installed in Korea.

They reached an "understanding" on the issue despite a political controversy in South Korea about it. 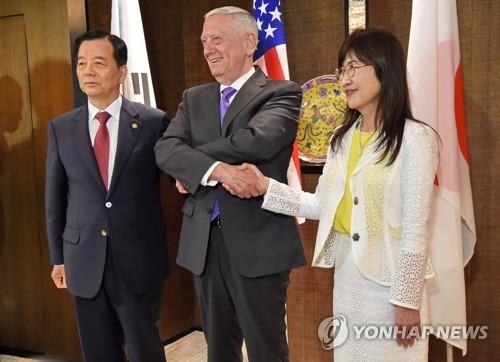 But Han had no bilateral meeting with China's top delegate, Lt. Gen. He Lei, vice president of the People's Liberation Army (PLA) Academy of Military Sciences, due to their hectic schedules.

Meanwhile, the Pentagon chief used his speech at a plenary session to provide details of the Donald Trump administration's Asia security policy.

He assured that the U.S. remains committed to strengthening ties with regional allies, forging closer partnerships with other countries and bolstering its military capabilities in the region.

Currently, 60 percent of all U.S. naval ships, 55 percent of army forces, and about two-thirds of fleet marine forces are deployed to the Asia-Pacific region.

"Soon, 60 percent of overseas tactical aviation assets will be assigned to this theater," he pointed out.

It was a clear message to Asia that the Trump administration, known for the "America First" mantra, is not turning away from the region, although it avoids using such symbolic expressions as "Asia re-balancing" and "Asia pivot."