After his defeat in the May 9 presidential election on the Liberty Korea Party's presidential ticket, he took a trip to the U.S.

He finished in second place with 21.4 percent of the vote in the election where liberal-minded Moon Jae-in of the Democratic Party won the presidency.

Upon arriving at Incheon International Airport earlier in the day, Hong apologized to his supporters who came out to the airport for the election defeat.

"I feel very sorry for failing to be able to uphold our wishes because I was not good enough," Hong told supporters. "The Liberty Korea Party as well as I are to blame for the defeat."

"Therefore, I will join you in safeguarding the values of the free Republic of Korea down the road," he said.

Hundreds of Hong supporters chanted his name, to which Hong expressed thanks.

Hong has yet to clarify his future plans, but he is widely expected to run in the conservative party's convention to pick a new party leader stated for July 3. 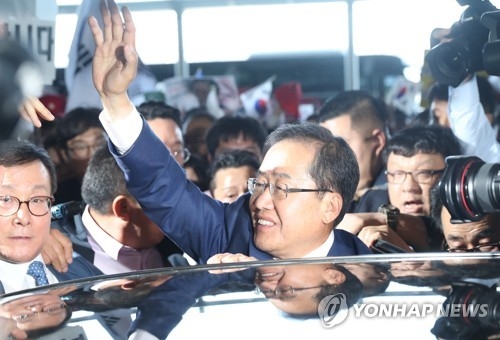