Chung, 21, was trying to become the first South Korean player to reach the last 16 at the only Grand Slam tournament held on clay. This was his first appearance in the third round at the French Open.

After dropping the first two sets, Chung battled back to take the third set in a tiebreaker and was then leading 3-0 in the fourth game when rain halted play on Saturday. 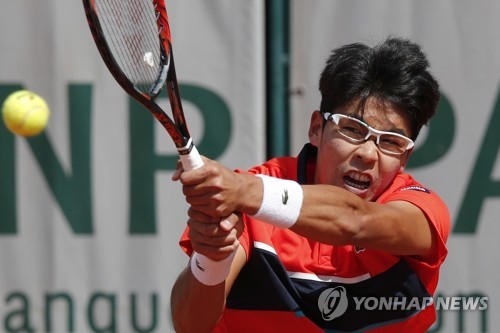 With a visibly frustrated Nishikori slamming down his racket and also taking a medical timeout with a back issue, the pendulum appeared to have swung in Chung's favor.

When play resumed Sunday, Chung won three consecutive games to even the match at 2-2.

Then Nishikori got to work in the decisive set.

The two held serves to open the fifth, and Chung held a double break point in the third game, before Nishikori turned the tables to hold serve and go up 2-1.

Nishikori then broke Chung to open a 3-1 lead. It was soon 4-1 for Nishikori, and later Chung double-faulted to hand the set and the match to the Japanese.

Chung has not yet taken down a top-10 player in seven attempts. This was the first time in the Open era that two male Asian players met as late as the third round in a Grand Slam event.

Chung said maybe the match would have been "better for me" if the rain hadn't interrupted play, but still called his run to the third round a "great experience" in Paris.

"I'm looking forward to another Grand Slam," Chung said. "It was a great honor to play with Kei. He's a great player. It was really fast and good stroke-making. But I tried my best and maybe I'm waiting for another day."

Chung said he didn't want to go down without a fight after dropping the first two sets. 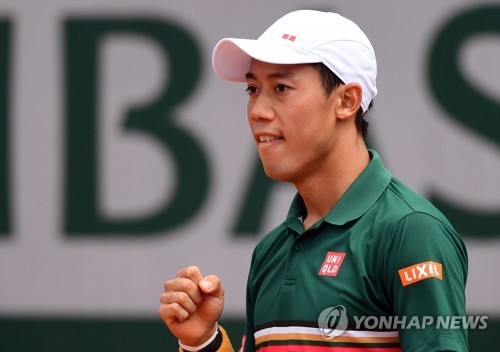 "I didn't change my strategies all that much; I just tried to stay composed," he added. "On top of the technical aspects of the game, I have to get better mentally when taking on top-ranked players."

Only one South Korean player, Lee Hyung-taik, has reached the round of 16 at a Grand Slam event. Chung said he hopes to help grow the popularity of tennis in his native country.