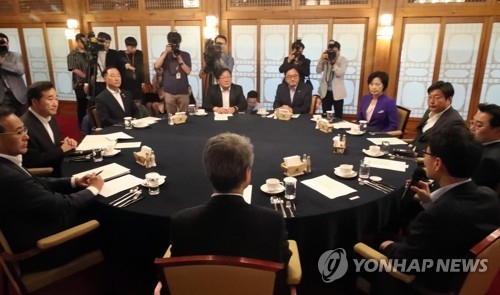 Under the restructuring plan, the trade section will continue to belong to the Ministry of Trade, Industry and Energy, but a trade bureau will be installed under the ministry, officials said. The trade chief will be a vice ministerial official but be called a minister, they added.

It is a reversal of Moon's policy planning advisory panel's earlier position to transfer it to the foreign ministry.

"(We) have agreed to install the trade bureau to respond to the rapidly changing trade environment and the spread of protectionism," Democratic Party policy chief Kim Tae-nyeon told reporters.

Kim pointed out that the government reorganization plan aims to revitalize the economy, enhance public safety and reflect social changes in the government structure.

The agency in charge of veterans' affairs will be elevated to a ministerial level to better support those who have contributed to national security.

To spur the country's technological advancement, a "science technology innovation" bureau will be installed in the Ministry of Science, ICT and Future Planning.

Ruling party lawmakers plan to submit the plan to the National Assembly during an extraordinary parliamentary session this month.