SEOUL, June 5 (Yonhap) -- President Moon Jae-in's approval rating dropped to the 70 percent level for the first time last week, down from the 80 percent range in his first weeks in office, a survey showed Monday.

In the Realmeter survey conducted from Monday to Friday, 78.1 percent approved of Moon's job performance, down 6 percentage points from the previous week.

In the same survey, 14.2 percent disapproved of Moon's performance, up 4.2 points from the previous week, while 7.7 percent said they were unsure. 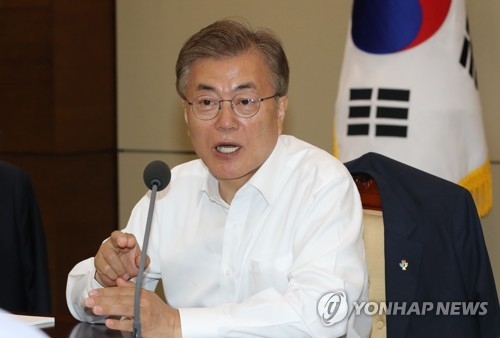 "It appears that some of his supporters withdrew their support amid the attacks on his Cabinet nominees during the parliamentary confirmation process and the opposition's offensives over the THAAD report omission," the pollster said.

Last week Moon ordered an investigation into what he claimed was the defense ministry's failure to report the deployment of four additional launchers of the U.S. THAAD missile defense system in South Korea. The move sparked backlash from opposition parties, which accused the administration of incompetence.

Moon's approval rating fell the most in the capital area of Gyeonggi Province and Incheon (8.3 points), followed by the conservative stronghold of Daegu and North Gyeongsang Province (6.9 points) and the central region of Daejeon, Chungcheong and Sejong (6.5 points).

The survey was conducted on 2,527 adults and had a margin of error of 1.9 points at the 95 percent confidence level.