Nam is one of the 24 players called up by head coach Uli Stielike for South Korea's upcoming World Cup qualifier against Qatar in Doha on June 13. With only three matches remaining, South Korea are second in Group A in the final Asian qualifying round for the 2018 FIFA World Cup in Russia.

Only the top two nations will earn automatic berths, while the third-place team will have to go through a playoffs. With 13 points from four wins, one draw and two losses, they trail Iran by four points and sit just one point above Uzbekistan.

Among the 24 players, Nam knows Qatari football more than anyone. After making his pro debut with the French side Valenciennes, the attacking midfielder moved to Lekhwiya of the Qatar Stars League (QSL) in December 2011 and has been playing there since.

"I know the Qatar national football team very well and also the players," Nam said Sunday. "I want to help my teammates who are unfamiliar with Qatar."

Nam had his best performance with Lekhwiya this past season. After leading his club to the league title with 14 goals and nine assists, the 25-year-old claimed the 2017 Qatar Football Association Player of the Year award, edging out Al Sadd players Hassan Haydos and Xavi Hernandez.

Nam didn't play against Qatar in the World Cup qualifier in October 2016, when South Korea had a tough 3-2 win in Seoul. Stielike's side finished the first half 2-1 after they failed to contain Qatari striker Sebastian Soria and were down to 10 men in the latter half, but goals from Ji Dong-won and Son Heung-min saved the team from defeat.

"I watched the match from the bench, and I remember that we were pushing forward aggressively," he said. "But a skillful Qatari striker was fortunate to score a goal, and it became a rough match for us."

Nam, who has four goals in 34 matches for South Korea, said scoring the first goal is crucial.

"Qatar have many players who are quick," he said. "We also need to be aware of their counterattacks."

Before the World Cup qualifier against Qatar, South Korea will first face Iraq for a tune-up here Wednesday. But for the Taeguk Warriors, all eyes are on beating Qatar next week. In the final round of World Cup qualifying, South Korea have yet to collect a win away from home.

"For this match (against Qatar), it's very important to collect three points," he said. "I will give my best effort to help South Korea advance to the World Cup with a victory." 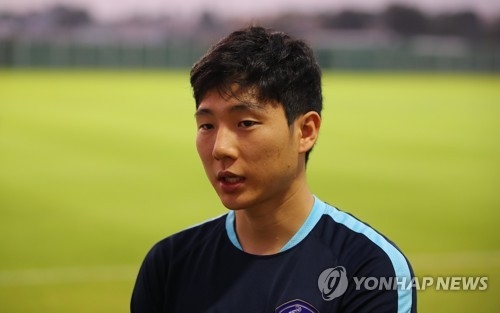