SEOUL, June 5 (Yonhap) -- The Moon Jae-in administration apparently hit a stumbling block last week over the proposed appointment of a new chief for the antitrust watchdog strongly rejected by opposition parties that is also keeping it from forming its first Cabinet, an official noted Monday.

The ruling Democratic Party failed to win the opposition's endorsement for a joint report on the outcome of a confirmation hearing held last week for the nominee of the new Fair Trade Commission (FTC) chief, Kim Sang-jo. 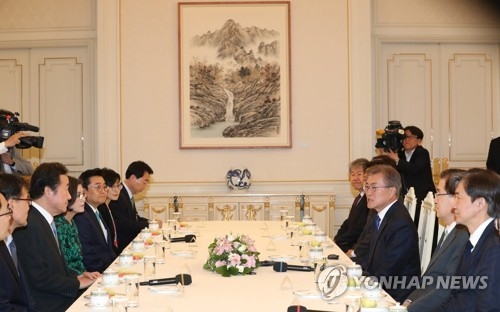 The president does not need the parliament's approval for his appointment of Kim.

The official from the presidential office Cheong Wa Dae said the president will wait until the parliament completes its own discussions on its own schedule.

"We will wait until the parliament completes its due process out of respect for the National Assembly," the official said earlier, while speaking on condition of anonymity.

Such a wait-and-see mode comes despite the new president's need to quickly form his first Cabinet and launch what will truly be his new administration.

Moon came into office on May 10 following his victory in a rare presidential by-election held the day before.

With no time between his election and inauguration, the new president was forced to set sail on a boat full of government ministers and other ranking officials appointed by his ousted conservative predecessor Park Geun-hye.

Parliamentary confirmation hearings for two of the remaining six members are scheduled to be held Wednesday. The rest have yet to be scheduled.

The problem is the main opposition Liberty Korea Party (LKP) is already opposing at least one of the six nominees for new ministers.

The main opposition party alone controls 107 seats in the 300-seat parliament. The LKP and three other opposition parties together control 173 seats, while the ruling Democratic Party has 120 seats, far short of a majority.

The ruling and opposition parties are again set to discuss Kim's appointment as the new FTC chief Wednesday, and the main opposition party has already said it will boycott the entire remainder of the ongoing parliamentary session should the government try to appoint him anyway.

Need to move ahead keeps Moon administration from moving ahead

Need to move ahead keeps Moon administration from moving ahead