RAS AL KHAIMAH, United Arab Emirates, June 5 (Yonhap) -- After making a long-awaited national football team return, Lee Myung-joo is ready to give his all even if he doesn't play.

Lee made the national football team return for the first time since January 2015 after head coach Uli Stielike included the hard-working midfielder for South Korea's upcoming FIFA World Cup qualifier against Qatar in Doha on June 13. With only three matches remaining, South Korea are second in Group A in the final Asian qualifying round for the 2018 FIFA World Cup in Russia.

Lee, who is with Al Ain FC of the United Arab Emirates (UAE), joined the national team training Saturday. Before taking on Qatar, South Korea will play a tune-up match against Iraq here Wednesday to check on their preparations.

When asked about why Stielike picked him, Lee said on Sunday, "Adjusting to new environment is important here, and I think I showed good performances recently."

The 27-year-old is one of the three players on the squad who is familiar with the Middle East environment, along with Qatari league players Nam Tae-hee and Han Kook-young.

Lee joined Al Ain in June 2014 from the South Korean side Pohang Steelers and made his name in the UAE's pro football league with his work ethic and smart performances in the midfield.

With Al Ain, Lee enjoyed a league championship in his debut season and an Asian Football Confederation (AFC) Champions League runner-up finish in 2016. This year, he helped the team reach the quarterfinals of the AFC Champions League.

"I don't think our players' physical strength is behind the Middle Eastern players'," he said. "But here, external factors like the stadium atmosphere and crowd are very important."

Lee, who has one goal in 13 international appearances, said he is willing to provide whatever the national team needs.

"Whether I play in the match or not, I want to help the national team collect the victory," he said.

Following his long-awaited national team comeback, Lee will also make a return to the K League, South Korea's professional football league, in the coming months. He recently decided not to renew his contract with Al Ain to serve his military duty in his homeland.

Lee can join Sangju Sangmu, a team of conscripted players in the K League, but to be eligible to apply for the military club, he needs to register with a local club for at least six months.

Lee admitted that he recently received a call from Hwang Sun-hong, head coach of FC Seoul. Hwang and Lee previously worked together when they were with Pohang.

"I have yet to decide whether I should go to Seoul or not," he said. "I still have some time, so I will think about it carefully."

Once his military service is over, which takes about two years, Lee said he is open to every option available. 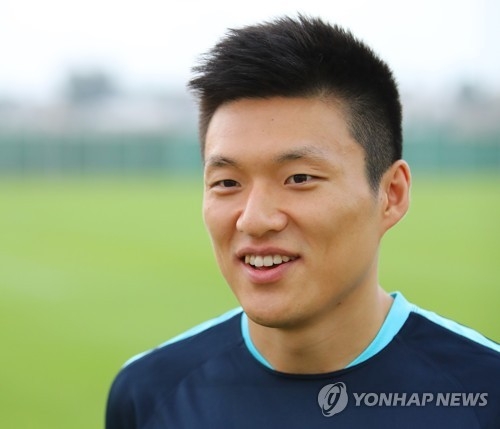